By now you’re probably all nursing your holiday hangovers and contemplating New Years Eve plans. Add to that the fact that everyone will be hitting the gym to work off those Christmas cookies, and it creates the perfect storm of opportunity for you to chat up that cute girl on the elliptical.

We’ve established that the grocery store is a prime spot for picking up more than just produce, and also that the cold approach is a little…tricky. But the biggest advantage you have in sidling up to any potential gym targets is familiarity – as in, “Haven’t I seen you here before?” Normally that line would leave you dead where you stand, but in these cases, if she recognizes your face or has kept the same fitness habits/schedule, that could actually work in your favor. 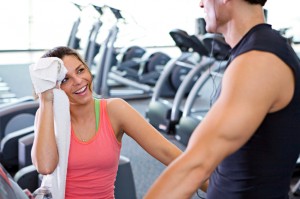 As a female who has been privy to gym game before, it helps to put us at ease if we have spent multiple workouts alongside you. We automatically know or assume a few things: A) that you live or work in the neighborhood, which is our ‘hood too, after all, and B) that you’ve seen us at our most unattractive and are still willing to roll up on us anyway – a check mark in the “plus” column for you, as far as I’m concerned. And finally, that you’re most likely single if we haven’t seen a workout partner of the female persuasion with you on a regular basis.

Working against you, however, are two possible scenarios. The first is that many of us feel self-conscious or will have our defenses up if we’re sweaty messes and you’re looking squarely at us, matted-down hair and all. Even girls who get gussied up for the gym eventually have to break a sweat.

The second is that she may just be looking to get her fitness on in a limited amount of time and isn’t trying to get sidetracked by your advances…unless you’re really good looking. A strong rule of thumb is that no girl will rebuff a guy’s advances if he’s exceptionally easy on the eyes, no matter how momentarily unattractive or rushed we may feel. Attention is attention, after all.

The best way to make your approach is to put yourself in her immediate vicinity. Jump on the machine next to hers, post up in the same corner to do your ab workout, whatever – just get in her line of sight so it’s not so random when you begin speaking. Or you could try a well-timed out trip to the water fountain right when she’s headed there, and then step back to allow her to go first (the obvious plus being that you now have an unobstructed view of her posterior – just don’t get caught scoping it out).

What you choose to say could vary anywhere from flattery to curiosity. If you’ve noticed she barely batted an eyelash during her five mile run, ask her if she ran track or ask if she has any pointers for that half-marathon you just signed up for. Did she just put up an impressive amount of weight on those leg presses or show off her speed bag skills? Use those slightly-stronger-than-your-average-female-bear abilities to ask her how she got those skills. She’ll appreciate that you noticed, so long as you don’t do it in a condescending way.

Then there’s the use-what-she-has-on method to strike up a conversation. If she’s rocking a lacrosse T-shirt and you played lax, too, ask her if she played offense or defense. If she’s wearing shorts from a school you’re very familiar with (read: you or a family member went there), ask if it’s her Alma mater, too. PS, you might want to avoid using that tactic if it’s a school that’s been in the news for something scandal-related recently. Penn Staters generally don’t like hearing the name Sandusky, for some odd reason.

If all else fails, ask what she’s listening to and tell her you need some new workout music if she has any suggestions? Sounds lame, but people tend to put some thought into their gym playlists, so maybe she’ll jump at the chance to share her tunes. 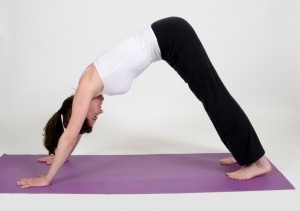 Just make sure to avoid these pitfalls: If she has earphones in and you’re trying to talk over it (and she seems oblivious to your attempts – intentionally or not) beg off, lest you embarrass yourself. If she’s running on the treadmill, obviously engaging in conversation is less than ideal, unless she has the breath control of Usain Bolt. And if you signed up for that yoga class just to get closer to her, probably don’t wait until you’re mid-pose to break the ice. There’s nothing more awkward than a fumbled attempt at small talk during a downward-facing dog, unless that’s what you’re into.

Remember to use what you have at your disposal, and pay close attention to her body language and behavior. She won’t appreciate being a captive audience to your advances while she’s doing cardio any more than you’ll enjoy getting brushed off in front of others, trust me.

Even though the gym is one of the harder scenarios for picking up women, it doesn’t mean it’s impossible – unless you skimp on the deodorant, in which case you’re on your own buddy. So just remember to be confident, flex your flirting muscles, and try not to sweat it.