When I started this website, I swore I’d always give it to you straight, no matter how many feathers it ruffled. So in keeping with that mantra, it has to be said: Sometimes women are straight up crazy.

Correction: Often women are straight up crazy, but sometimes they are especially crazy, which is entirely why I have a job at all – helping you sift through the madness. We say one thing but our actions say another (I say “we” with hesitation, I have a strict “No Ambiguity” policy for myself), and it all amounts to men throwing their hands up in utter disgust.

The best way to illustrate my point is with an anecdote a friend told me about a woman who came on strong, but when the chips were down, backpedaled hard. Some call it being a tease, but I like to call it the “pump fake,” because why not keep going with the sports analogies this week? And no, not a pump fake in the dirty, Urban Dictionary sense of the term. I just realized there are alternate meanings for this, but I’m too much of a lady to link to them, they’ve vile.

Getting back to the story, aforementioned friend was on an airplane when he was approached by a flight attendant who essentially asked him out. As in, she led off with “Are you single?” – a very bold move, in my opinion. Also, I’m pretty sure it’s against airline policy, but since bedding a stewardess is part of every man’s fantasy, he can hardly be blamed for being intrigued. Plus, according to him she was cute, which helps.

She invited him to a friend’s party, he showed up with buddies in tow, and they flirted for a while. She then pulled the, “Do you want to get out of here?” card (again, not exactly the shy wallflower type) and brought him back to her apartment. Then, after brushing her teeth (she also offered him an airline-issued toothbrush kit to do the same, my favorite part of the story), she got into bed and told him to join her. But, immediately after he complied (keeping in mind he’s no longer wearing his jeans at this point), he goes in for the kiss and she puts the full-on brakes on, saying, “Whoa whoa- what kind of girl do you think I am?” 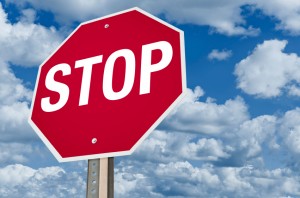 Oh wait (raising hand and waving it wildly)! I’ll answer that: The crazy kind. No sane female picks a guy up, invites him to a party, tells him to come back to her place, invites him into her bed and then grinds the action to screeching halt. It’s just bad form. What did she think he would expect, that they were going back to her place to read Goodnight Moon and drink hot cocoa? To spoon? Let’s be real here.

Needless to say, after explaining that he didn’t expect her to sleep with him (but probably expected at least some action, being a guy after all – but a gentlemanly one, so I believe him) he stayed for an hour and then got up to leave. “I figured I might as well at least catch a little nap at that point,” was actually his justification. Awesome.

The ending to this mixed signal bedtime story is that, while he was attempting to leave her apartment on the sly, he couldn’t figure out the locks on her door and she had to get up and let him out. OUCH. Correction, *that* is my favorite part to this story. It’s hysterical (and super awkward). But the takeaway should be that situations like these just make for uncomfortable exchanges if you’re not clear with your intentions.

Allow me this disclaimer though: I would never encourage women to “put out” sexually unless they wanted to – that’s your choice, and to hell with any man who pouts about you holding onto your virtue as long as you’d like, ladies. But that said, I can’t think of any man whose expectations wouldn’t be that you were going to take the padlock off the door after all she did to pursue him in that story. It seemed like a fair bet that she was on board.

And so I urge all of the women out there now: Please, please don’t let your actions facilitate and further the notion that all women are teases, or, just batsh*t crazy. The rest of us don’t appreciate it. If you were going to zig and then you zagged for some reason (that became apparent late in the game), that’s one thing. Hey, it happens every now and again. But if you’re a pro at leading a man down the primrose path only to reveal that you have your body locked up tighter than Leavenworth, then that’s just unfair. Not to mention bad form.

I can’t emphasize this enough: Mean what you say, and say what you mean. And, since actions speak louder than words, don’t go from Paris Hilton to purity ring in the blink of an eye, or else one day you might encounter a man who’s less than gracious with his disappointment.

Being clear from the get go is the best policy, even if it means having a slightly awkward conversation early on. Because in the end, it’s easier to make your hasty retreat from a public place than a more…intimate setting later on. Especially if the door is locked.

Have a story for Miss Wingman? Want to make some topic suggestions? Ask away – misswingman@gmail.com. I take requests. *Special thanks to the friend who offered this story, I hope next time you fly it’s in friendlier skies.

One thought on “TEASE WINGMAN: THE DREADED PUMP FAKE”