This video says a lot – you should watch it…then keep reading.

Amid the flurry of Leap Year-related stories today, the one that struck me most has to do with the Irish tradition which calls for women to propose to men during a leap year. It was born from a complaint made by St. Bridget to St. Patrick in the 5th Century, whereby women were frustrated with waiting for a man to ask for their hand in marriage. See that, guys? Women were difficult even in ancient times.

This may or may not surprise you (those that don’t know me personally at least), but coming from someone whose job involves not falling into line with accepted views on relationships, I have a very traditional view when it comes to proposing. Women should not, under any circumstances, be the ones to pop the question. 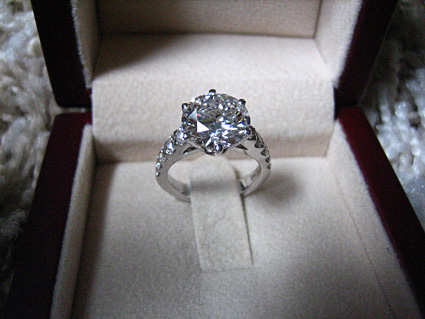 And while we’re on the subject of taking a knee, you should always do that, too. And ask her father (or parents, or mother, or mailman – whoever) for her hand in marriage. I would have a hard time accepting if the man I chose to marry didn’t at least run it by my father first. It’s a mark of respect, and one that – though slightly antiquated – should be honored.

If a man’s not proposing to you, there’s a reason, in my opinion. Maybe he’s just not ready yet – you get there when you get there, and we don’t always arrive at the same time. Or maybe he has doubts – even more reason to hold off on popping open that ring box. But whatever his misgivings, you should be patient. Nothing worth having comes easily and instantly, after all.

Further, this is the only instance I can think of where I will ignore my own, “Don’t pay attention to anything he says, just pay attention to what he does” advice. I don’t care what hoopla – or lack thereof – my future fiancee organizes for his proposal, I just want to remember what he says. I will be paying attention to his words more than anything else, because in that moment something honest, heartfelt and (hopefully) romantic should pour forth. So, even if it’s not terribly poetic, it will still be special – and for that I’m all ears.

I don’t envy the male task of having to propose. I can’t imagine how nerve-racking it would be to take on such a weighty and life altering moment, and for that I give you men credit and much respect. But, even though I’m all for women being empowered, confident and progressive, I think that a woman popping the question is a little too modern for this modern girl. Call me crazy, but I want for the memory of that day to involve me staring down at the face of some wonderful man – not staring up his nostrils at his shocked facial expression.

So on this rarest of leap days, I propose that we nix the female proposal, tradition or not. There are instances where the status quo deserves to be shaken up a bit – slavery, women’s suffrage, gay marriage – history is riddled with examples. Sometimes it’s good to turn things on their side and challenge the norm (though these are admittedly more crucial topics than marriage proposal etiquette, of course). But call me Old Fashioned Wingman, you’ll never convince me that this should be one of them. And that’s a promise I’ll stand behind.

One thought on “LEAPIN’ WINGMAN: A NONTRADITIONAL VIEW ON TRADITION”