While perusing the web recently, I’ve stumbled across more than a few style articles proudly proclaiming that bracelets for men – otherwise known as brocelets, if you will – are “back in.” And I just couldn’t stay silent.

Seriously, people? The brocelet? We’ve been over this, boys. It’s generally not a good look for most of you. Also, remind me to slap whoever came up with that term.

If you’re brave or fashion forward enough to try out this man trend, it’s not that I’m saying that there aren’t some acceptable or hip styles out there. I’m just saying that most men (at least the ones who aren’t fashion editors) aren’t equipped to tell the difference between chic and cheesy when it comes to this accessory. Sorry, guys, it may sound harsh but it’s true.

The “it” brand of brocelet that everyone seems to be talking about these days (and yes, I just vomited in my mouth a little typing that) is by Miansai by Michael Saiger. These woven bracelets manage to be preppy (as in, you look like you should be swabbing the deck of your sailboat), without entirely crossing over into Dbag territory. I guess that depends on who’s wearing them though. And, score! I actually don’t hate them. In fact, they sort of rock.

But they’re not cheap. Women have no problem plunking down cash in the name of retail, but I’m not sure if most men are OK paying over $100 for something that looks like you could’ve made it in summer camp.

I’m joking. They don’t really look like something you’d make at summer camp, THIS does. Thom Dolan’s land-ho style is even more DIY, but still fun. Or you can try my other go-to brand for both men’s and women’s jewely, Giles & Brother. As I’ve said before, it’s the less expensive sister line of designer Philip Crangi’s badass baubles. As in, literally, they’re brother and sister. 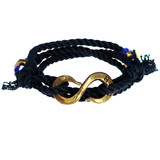 For guys, the rope with S hook and leather lashing styles are standouts, but really everything they do is suitable for streetwear. And it wouldn’t make me want to call you out for wearing man jewelry to your face. Which I’ve been known to do.

*Miss Wingman note: While we’re on the topic of things I’d call you out for wearing, please add to the list the leather studded cuff (unless you’re a Ramone, one of Iggy’s Stooges or just generally want to get your ass kicked). Also, the gold ID bracelet has to go as well (unless you’re in a crime family, or it has sentimental value…in which case sorry, I suck). Man jewelry in general is tough to pull off, unless you’ve got the gritty thing working for you. (Think Johnny Depp and multiple tats). Any attempt to go diamonds, pinky ring or gold chains and I put my foot down…but that’s another post entirely.

I’m not suggesting that you jump on the brocelet bandwagon, I’m just saying that if you choose to indulge, be discriminating with your choices. I’ll give credit where credit is due, however, and draw your attention to this stellar rundown of acceptable man accessories (nice job, GQ) as well as this history of brocelets through the ages. New York magazine really outdid themselves.

So good luck accessorizing (or not), and remember this men: if you want a shot at having some actual arm candy – of the female variety – pay attention to the other kind, first.