They say good things come to those who wait. And, if you’re a diehard Miss Wingman fan, then you’ve been waiting a pretty long time for another edition of “Pick Up Pointers.” We’ve delved into the world of The Approach at the gym differently before, and also within the grocery store aisles. But this time, I suggest you put down the produce and pick up a spongy floor mat, because yoga class is where it’s at, boys.

I’ll admit, I’ve never been a fan of yoga myself, (Miss Wingman prefers to wail on a heavy bag. Namaste, my ass) but last night my sore muscles drove me into the land of trippy music and cleansing breaths. Apart from the fact that the workout itself is beneficial to everyone, if you can get past the bizarre meditations (I don’t do “zen,” apologies to my Yogi friends), there’s another obvious bonus to taking a class: The women.

Men of the world, I’m sure common sense dictates that you’ve thought of this before, but allow me to emphasize how RIDICULOUSLY STACKED those classes are with women – hot women – wearing tight clothing, and doing bendy things. 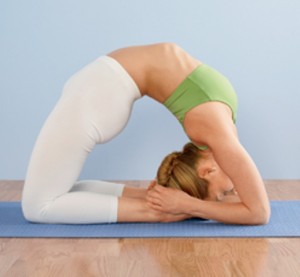 I felt euphoric, like I’d found the promised land for guys. Much like the time I found a bar overflowing with a sea of dudes watching hoops at the Garden, or stumbled upon a good after-work spot in the finance district (so that’s where you’ve all been hiding…) Hitting the mother lode is fun, especially if I can spin it in your favor.

If you don’t need any further convincing, allow me to help you navigate the proper way to approach a woman in yoga class. Here are The Do’s and Don’ts of Fitness Flirting:

Do: Hit up a class in a normal gym, not a yoga-only spot. Why? Because there’s a difference between seeming like you just want to try out this yoga thing, and appearing that you’re either A) Mr. Sensitive Ponytail Man B) blatantly creeping on women or C) of questionable sexual orientation. Regular gym yoga classes are harmless and could just have landed you there out of sheer curiosity (hey, it’s plausible enough).

Don’t: Go the Bikram yoga route (read: hot yoga). Why? Because the only thing less sexy than having your own sweat pour off of your body is having someone else’s sweat drip on you. Plus, it’s a little hard to work up your charm when you feel like you’re breathing through a cocktail straw.

Do: Wait until before or after the class to chat up any cute women you spot. They’re pretty serious about the whole silence/mood music/soothing lighting thing, and you wouldn’t want her to think you have no sense of self-awareness. Etiquette is key.

Don’t: Stare. Yes, many of the poses involve putting your ass in the air or spreading your legs far apart, but that doesn’t give you license to skeeve us out (Down Dog, anyone?). Be crafty in the quick glances that you steal. Kind of like how you check out our cleavage when we’re “not looking.” Remember – eyes on your own paper, boys. 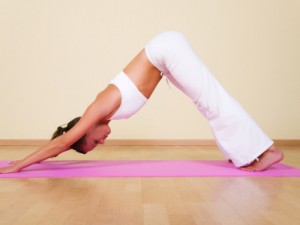 Do: Casually establish why you’re in the class in the first place, if you feel self-conscious about it. Asking the girl on the next mat over if she likes the workout because you “have this sports injury in my back that I’m trying to fix, and someone suggested trying yoga,” isn’t a bad idea. Sure, it’s lying, but it’s the little white kind. You have my permission.

Don’t: Be too good at it. If we wanted to date a guy who was Gumby-flexible or could hold a difficult pose indefinitely, we’d date a principal dancer in the New York City Ballet. There’s a difference between being open-minded enough to try yoga, and chipping away at your masculinity. Walk that line at your own risk.

Do: Be adorably clumsy – which probably won’t be intentional. You’ll likely have a hard time with yoga at first anyway. Watching the few guys in the class around me struggle to keep their balance was endearing, actually. And it gives you a good excuse to chat a girl up afterward if you catch her chuckling.

Asking for pointers or making a joke about how much your skills are lacking is a harmless way to get our attention. Just don’t ask her if she can do that thing with her legs in other places, too – unless you want to hear her tell you to “Nama-stay away.”  Far less amusing, boys.

Also, Do: Take care of your feet. Yoga involves being barefoot, and nothing will kill your game faster than if she looks over and sees your mangled, gnarly man-hooves. You don’t have to go full pedicure, but for the love of God at least trim the nails.

And finally, Don’t: Be afraid to say nothing at all. If you can tolerate a few weeks of going to the same class (you might actually like it), you’ll develop enough of a rapport or familiarity with the people in it to strike up a conversation with them elsewhere. If you’re too shy or just don’t feel confident that you’ll say the right thing, try just putting your mat in close proximity to hers for a few classes, so she gets to recognize your face.

But be mindful of personal space, don’t crowd the poor girl. Then, if you want to chat her up at the water fountain or arrange an “accidental” run in arriving at or leaving the gym, you can use the “Hey aren’t you in that yoga class?” line without sounding like a D-bag. It’s a slow strategy, but still effective.

But all of this is to say that it should, theoretically, offer you the opportunity to showcase your personality and allow her the chance to get to know you. Once you’ve got our attention, it’s up to you to be yourself (which is charming, I assume) and let things play out naturally. Pick up tactics only work if they’re only used to get your foot in the door, not to guide the whole process.

So go ahead – bust out your best spandex (please don’t), take some deep breaths, and don’t forget to limber up, boys. If you do this right and get lucky, you just might need it.