Let’s face it – the only thing more fun than watching your favorite sports team play is watching them in the playoffs. Hopefully they dominate, but even if they don’t, the facial hair your favorite players often sport is entertainment enough.

But, it’s come to Miss Wingman’s attention that many women don’t know about the time-honored tradition of the playoff beard (what?!), and that – not surprisingly – they hate your facial hair, boys. So I’m here to sort out the good, the bad and the Dear-God-That’s-Ugly of your late season grooming. 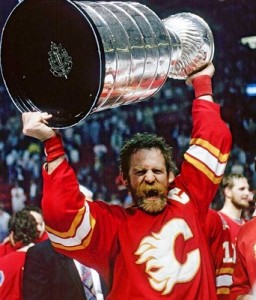 Maybe it’s because I’ve been a hockey fan above all else (and the Rangers are actively giving me a heart attack right now), or maybe it’s because I want to see if NBA golden boy Blake Griffin really can’t grow a mustache to match his ginger-colored beard. Either way, when players forego the clippers (pun intended) and let their stubble go full-Rick Ross, I can’t help but beam with pride. But apparently I’m one of the only females who feels this way. Sigh…

First let’s address why women hate beards or facial hair of any kind: They’re itchy, and stubble tears up our faces. This comes as a surprise to exactly no one. We don’t love having our faces look like a blotchy red checkerboard any more than you guys love ending up with lip gloss all over your mouths. I’ve already explained what your facial hair says about you, but even if you only rock the Sasquatch look once a year, don’t be surprised if she still hates every minute of it.

To the ladies, though, I respectfully make the following suggestion: RELAX. It’s all in good fun, and it won’t last forever. Plus it gives you some ammo next time you wear something he absolutely hates (like capri pants, or UGGs).

For the men out there, my advice to you is this: Keep it anyway. Even if she argues that playoff beards are only for players, not fans, remind her that “fan” comes from the word “fanatic.” And nothing is more die-hard fanatical than looking like the Unabomber to honor your team.

Further, unless you have photos coming up for some monumental occasion in life (your wedding, the birth of your child, etc.) that’ll anger her for years to come when she revisits them, don’t succumb to her beard-hating requests, I beg of you.

This probably won’t endear me to the ladies, but whatever – you can’t win ‘em all. I can’t stand it when women are uptight and nag about silly little things. Let the boys have their fun, please. There are things in life to get upset about (adultery, financial trouble, bad parenting), but playoff beards definitely aren’t one of them.

Plus, the playoffs are a time not only when players dig deep and pull out all the stops in their pursuit of the W, but also when they just get straight-up filthy and ruthless on each other.

Concuss someone so badly their head snaps back? Yup – and probably get away with it, too (I’m talking to you, Neil). Throw a cheap shot elbow that drops a guy like a sack of potatoes? As long as it’s in the name of a celebratory chest pound (“World Peace” my ass, you classless f**k). But this is the type of insanity that comes out of the woodwork when a championship is on the line. It’s just that intense.

So the very least you can do is rock your stubble proudly in the meantime. If she’s not a fan of the Inigo Montoya look, so be it. Challenge her to a duel if you have to (I can’t take credit for that one, but it was too good not to repeat). But for the love of all that is holy on the court or on the ice, don’t cave – even if you look like a caveman.

She might cut you off temporarily or freeze you out, but stay strong. Hold your head up high until your boys get eliminated or hoist a trophy, I salute you. You can rest easy at night knowing that you’re taking one for the team.