Well well, Wingman faithful, it’s been a minute since last we’ve met. My apologies for the lengthy pause, but I’ve recently rejoined the world of working stiffs and have taken on a salaried job in addition to my Wingman responsibilities (mama’s gotta pay the bills, what can I say?) The gig is great. The people are great. The fatigue is making me feel 90 years old.

In related news, office life hasn’t changed since last I left it. Nor has my inability to juggle my time effectively. I flop down after work exhausted, my fitness is suffering, my tan is suffering, and my apartment has surpassed resembling a hoarder’s lair and is rapidly nearing health code violation status. Good times. But most importantly, I’m not going to get evicted and have to move home. It’s hard to write about romance when you live with your mom and dad.

But have no fear, Miss Wingman will remain alive and thriving, and the added bonus is that now I’ll have even more love in the workplace fodder to include. See? It’s a win-win. And speaking of things I’ve picked up in the office lately, I recently learned of a trend from my coworkers that I couldn’t help but pass along to all of you. And by “pass along,” I mean shame mercilessly. Behold! I give you the man-gagement ring. 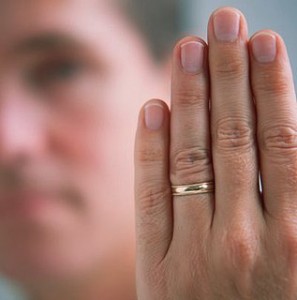 I know. I wish I was kidding.

First of all, if you need a definition of the term A) you might be a little slow on the uptake, I thought I was the only one in need of serious caffeine, and B) ask and ye shall receive. A man-gagement ring is a ring that guys wear after they’ve proposed to their significant other (or vice versa, but that’s a whole other ball of crazy that I can’t really get behind), and this ring alerts the rest of the population that said male is OTM. That’s “off the market,” for those who aren’t in 7th grade.

For the record, it also announces that he’s also officially whipped, but that’s beside the point.

There are several things wrong with this idea, not the least of which being that it’s a well-documented fact that Miss Wingman hates man jewelry. But since wedding/engagement rings don’t really fall into that category, I’ll let them slide. That still doesn’t mean dudes have any business wearing engagement rings, though.

My biggest issue with this phenomenon is that if you have to broadcast that your man is off the market, then you’re either a very insecure individual or else you just don’t trust him. But if it’s the latter, then you shouldn’t even be dating him, let alone marrying him.

Also, that’s just a little too Jonas Brothers/purity ring for my liking. Or should I say “too Michael Buble,” as he has openly worn the dreaded man band himself in public. If you’ve asked a woman to spend the rest of her life with you, shouldn’t it just go without saying that you’re going to forsake all others (at least until someone younger/hotter comes along?)

I’m putting the man-gagement ring right up there with couples who have a joint Facebook account. And we all know how I feel about that.

Some things, while they seem like a good idea at the time, are simply – in a word – unnecessary. So what do you think, boys? Am I being too judgmental? (Who moi? Never). Or are the people who rock this craze straight up crazy? Incidentally, I’m not talking about guys who marry each other who choose to wear man-gagement rings – that’s totally fine – just in case you were going to come at me like that.

Log on and weigh in, because I’d love to hear the male perspective on this one. Apparently this whole man-gagement mania is common practice in several European countries and Norway and Finland. But since Norway also brought us Swims, I think it’s fair to say their opinion no longer counts.

So hit me up in the comments section or at misswingman@gmail.com. If you’re ranting, I’m listening. Just don’t try to convince me to like Croakies or Crocs, boys. Thanks.