Don’t get me wrong, I love writing this blog. I poke fun at the things that warrant mockery, make light of those universal love themes with which we all struggle, and occasionally even help the men of America. It’s an outstanding gig.

But one of the unintended side effects of running this site is that it has opened the door to people telling me all sorts of batsh*t crazy things that they’ve done, someone’s done to them, or things that they swear they’d never do (and are obviously lying, duh).

So I thought it only fair to compile a list for your reading enjoyment to illustrate what I deal with on a daily basis. Consider it a Pandora’s box of Have-You-No-Shame? Also, try not to let it give you nightmares.

Some of the most disturbing stories come from Miss Wingman’s inner circle, thus aren’t for public consumption. But if I were a less loyal person, I’d demonstrate just how degenerate the company I keep is – so consider yourselves (and you know who you are) lucky.

5- To the newlywed male who, right before the big day, lamented having to get married by saying, “Soooo…I guess that’s it then?” I say to you: Yes. Yes that’s typically the idea behind marriage, ironically enough. Also, I hope you were joking.

4- To the girl who accepted a date with a fabulous guy and then, after they nailed down plans, said to him “You’re lucky. I gave you a Thursday. Hope you’re impressive,” I say to you: Please stop speaking. It’s arrogant, chicken-headed remarks like this that give the rest of us women a bad name.

3- To the dude who ditched his fiance for another woman, then when he grew tired of hooking up with Other Woman decided to woo ex-fiance back only to eventually tell her “Nah, I’m going to move abroad for a while. I think I was right the first time,” (after all of her friends and family alienated her for taking him back), I say: You are the reason why women are so insecure. May I suggest moving as far away as humanly possible? I hear Guam’s nice.

2- To the TRULY DESPICABLE married guy who doesn’t even bother taking his wedding ring off when he goes out to pick up women, because he tells them he’s a widow whose wife died of ovarian cancer (and then he gets sympathy ass because of it), I say to you: On behalf of all women, if I ever meet you face to face you better hope your junk-protecting reflexes are quick. Also, on behalf of anyone who’s been affected by cancer, I say: If karma exists, you’re definitely coming back in your next life as a toilet seat. And, I’d look both ways before crossing the street if I were you. It’d be a shame if you were taken out by a bus…

And finally, 1- This. I pray to God that this is wrong. Sweet Jesus, please let this be a mistake. But if it’s not, I’m moving to Seattle. Or someplace where they don’t wear sunglasses very often. PS, this does NOT serve as vindication for those of you ardent supporters who have been harassing me lately. It just means that miserable style loves company.

An honorable mention should go out to the other most disturbing thing I’ve seen this week, this clip of a girl so distraught by the news of the “Twilight” chick cheating on her boyfriend that she is inconsolable. 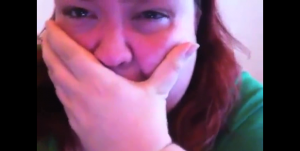 Oh the legions of heart broken, black nail polish-wearing tweens who are grieving right now. I don’t know what I’m more disturbed by, her level of anxiety at around 3 minutes in, or the fact that the guy KStew cheated with was a married father of two. Classy.

So that’s it, kids. Despite all the buckets of crazy that get hurled at me every day, I do believe that people are fundamentally good, and that you can actually find a loving, non-dysfunctional relationship. You just have to sift through the shameless riff raff to get there. So keep the faith, and here’s to making the dig as painless as possible. Cheers –MW.