Just like there are cat people and there are dog people (dogs all the way – who wants the pet equivalent of a moody chick?), there are also two distinct species of girl. Those who like sports, and those who …I mean, who do not.

I’m sure this will cause members of my own tribe to throw me the side eye, but I’m sorry, it has to be said. And with playoff football upon us and the THANKF***INGGOD return of hockey (finally), the distinction between these two breeds of female has never been more evident.

But how does this affect you, my male readership? It’s simple. One kind you should date, and the other kind…well, you’ve been warned. 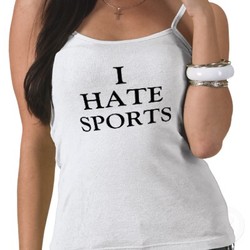 Now before the lady lynch mob comes after me for making a statement like that, let me explain. I’m not saying that you shouldn’t ever date women who don’t like sports (some of my favorite women don’t know the difference between a wide receiver and a point guard, in fact). I’m just saying that if you do, be prepared to have to justify your own love of the game, and perpetually exist on a different planet than her. Even more than you already do, that is.

Whatever your game of choice, your passion for the sport and, by extension your team, will cause you to do irrational things during the season – we know this. You sit in sweatpants on your couch for an entire Sunday screaming obscenities at the refs. You talk to the members of your fantasy league more than the members of your family. You do superstitious rituals like growing playoff beards (I support it) and wearing the same socks three days in a row. Such is the manly love of sport. It’s hardly an anomaly.

Women can share this passion for the game, too. And many of us do. I make it a point to not watch any Yankees/Giants/Rangers/Knicks game with anyone I’m dating until the romance is so far along that he’s too ensnared in the web of my awesomeness to untangle himself. Revealing my level of NY sports crazy is best strategically left until it’s too late to turn back.

But the fact remains that there are still women out there who wouldn’t know Chris Paul from Ron Paul, and who think RG3 is a model of Audi, not a quarterback. And they’re mixed in with the rest of us. Why do they hate sports? No clue. Maybe they think it’s a waste of time. Or barbaric. Or maybe they just lack the “fun gene,” your guess is as good as mine. No sense asking why, just identify and dodge at all costs.

So how can you pick them out at the bar? Well for starters, they probably won’t even be at the bar. At least not during the games. And if they are, it’s only to scope out the cute guys, trust me.

The male population skyrockets at our local watering hole during the NFL season, MLB playoffs or during the pinnacle of sports kick ass-ery, March Madness. Women know this, so they bust out their tightest jeans and boob-flattering tops to catch your attention while “casually walking by” during half time. It’s like shooting fish in a barrel, boys.

But beware of the women who show obvious signs of not caring about the game being played on the screen behind them. I’ve said it before, the easiest way to pick them out is by blocking the TV with your body and then asking them what the score is, how much time is left in the game, or which team is in what color uniform. Those that are only there on the hunt won’t know the answer.

Incidentally, they’re also the same girls who will talk your ear off during a game you’ve been dying to watch, or will try to get you to go to brunch/shopping/etc when your team’s playing. And don’t even get me started on girls who wear pink sports apparel. That sh*t is an abomination.

I’m not saying that women who’s interests lie in other areas, like the arts, or fashion, or… (the hell if I know, what else is there?) aren’t good people. I’m just saying that they make for more complicated girlfriends. Unless, that is, they’re willing to just turn a blind eye to your fanaticism and accept that you’ll be a ghost during the post season. And probably the regular season. And during your fantasy draft, too.

But too often, these sports-indifferent females’ reaction seems to be an eye roll or a complaint, rather than resigning themselves to the Laws of Dude Nature.

There are exceptions to every rule of course, but if you want to avoid dating culture shock, stick with girls who can name ESPN announcers. Or at least know something about anything athletic. Even if it’s about golf. Eh…I take that back. Tennis, maybe.

And if she happens to be reeeeeally sports savvy? Consider yourself lucky, unless she can school you on the court. It takes a confident man to not feel threatened by a girl like this. (It helps that she’s hot, though).

So there it is – gauntlet thrown. I can’t help it if there’s a chasm between women who appreciate sports and women who’d rather be, like, knitting or reading or something. Sure, the latter might still sneak through if she’s a real smoke show, but in the end it could be like dating your grandma. And there’s nothing sexy about your grandma. For most of us, at least.

Don’t be afraid to wave your competitive flag proudly, boys, and remember: girls who know the score are more fun to score with in the end. Good luck, and game on  –MW.

One thought on “GIRLS WHO HATE SPORTS: EW, REALLY?”