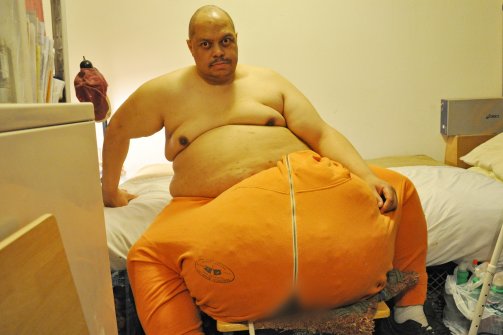 As much as I’d like this to be a headline from The Onion, it’s legit. Legitimately awesome, that is.

Well, not if you’re that guy.

Move over, weepy chick from “The Bachelorette” (who I actually like, for the record). There’s a new reality TV sheriff in town, and for once dudes won’t feel like a giant weenie for watching it.

And speaking of giant weenies…

The star of the show’s already being upstaged by his costar: his giant, full-grown adult-sized, 132 lb scrotum. The special, creatively titled “The Man With The 132 lb. Scrotum,” will air on TLC – that’s The Learning Channel, for those of you who lost track after all those shows featuring underage girls in excessive eyeliner – on August 19th.

So who is the unlucky dude who spawned a million nut sac puns? Wesley Warren, a 49-year-old Las Vegas man who suffers from a rare disease called scrotal lymphedema.

In addition to looking like he’s hiding the Olsen twins under his sweatpants, his condition also causes simple tasks like walking, preparing meals and going to the restroom to be both difficult (ya think?) and painful.

But if exploiting the suffering sounds like a dick move to you (sorry, I had to), it’s only because it is. And though I’m an avid viewer of everything from “Breaking Amish,” to “Long Island Medium,” to that show where people eat toilet paper, even I can recognize that this latest especially lacks class.

But hey, what do we expect from the network that brought us “My Teen Is Pregnant & So Am I?”

So if you’re in the mood to go balls to the wall with your programming, (again – too easy), then clear out all those old episodes of Duck Dynasty and set your DVRs, kids. Because the only thing that would suck more than having a 132 lb. scrotum is if those giant genitals couldn’t even bury the “I Eat 33,000 Calories A Day” show in ratings.