Whoever said that you don’t look for love, it finds you, has obviously never met Amy Webb. Six years ago, after experiencing the fahhhhk-what-am-I-going-to-do-now death blow of a particularly bad breakup, she did what any resourceful woman in her 30′s would do and turned to online dating. But, frustrated by the lack of marriageable prospects she was finding, Webb, a self-described “numbers person,” turned to a system she could understand better to help her sort through the riffraff: data.

Since my mathematic prowess peaked in 11th grade AP Calculus, I won’t even try to explain how she came up with her own algorithm to assign a points system to prospective suitors. Miss Wingman basically counts on an abacus, and most days I’m lucky if I can remember the 4-digit code to unlock my iPhone. So instead, I’ll let her do it.

But I will add for those who’re too ADD to sit through the video of her amazing TED talk (it’s long, I know – but worth it), that it included creating dummy profiles of fictitious men to emulate the characteristics she saw in her successful female “competition,” coming up a with a new 72-data point requirement scale, and also, getting scammed along the way by a date into footing a lavish dinner bill which cost her nearly a month’s rent. Ouch.

Oh, and my favorite part, finding empirical proof that there were approximately 35 men in the entire city of Philadelphia’s 750,000-male population who fit her dating criteria. If that’s not a kick in the junk, I don’t know what is.

Needless to say, she not only narrowed her search with laser precision, but she was able to find the man she eventually married and with whom she now has a daughter. So, suck on that, people who say that everything’s written in the stars. Sometimes that shit’s written in javascript, and only the spreadsheet strong will survive.

But even if the rest of us aren’t able to go all “A Beautiful Mind” on online dating, that doesn’t mean that there aren’t valuable takeaways from Webb’s stint as the Romantic Rain Man. Thus, here’re 5 lessons the Looking For Love crowd can learn from the woman who hacked her way to a husband. 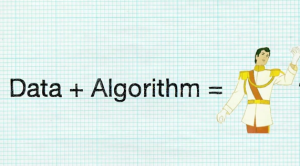 5. A picture’s worth a thousand words…or at least, a few dozen date requests, so long as you look hot in it. So change out those photos that show off your creative and quirky side and show the audience what they really want to see: that you’re not a total sloth. And, if you are a total sloth, don’t sweat it. Just try to look your Sunday best and hope that Ms. Sloth is trolling your profile, too.

4. It’s the big stuff that matters, not the details. As Webb pointed out, it’s nice to find people who have the same taste in movies, but it’s nicer to find people who share the same core values and social attitudes. Sure, I’d love to find the Ryan Reynolds look alike whose iPod is also Beastie Boys heavy, who plays hockey, loves sarcasm, hates loud chewers, and whose favorite movie is also “Braveheart.” But I’ll settle for the guy who’s supportive of me and compassionate to others. That works, too.

3. There are, sadly, a lot of assholes out there. That said, it’s important to always remember that those assholes exist regardless of how you act, how you look or what you say – it’s no reflection on you. Just do your best to try not to focus on them.

2. Grandparents are always right. And finally…

1. …Except in this case, her grandmother was – sorry, Nana – wrong. Don’t let people tell you you’re being too picky, just know the difference between being selective and lacking perspective. Prioritize what you want in a mate, and don’t settle for less than you deserve.

I’ve said this before and I’ll say it again: Set the bar. And no matter how tired your arm gets holding it up there while you wait, don’t lower it. The payoff will come eventually, you just have to keep the faith. Or, if you’re this chick, keep the algorithm going. Here’s hoping we all crack the code, too.