While watching football at a bar this past weekend, a male friend showed me a half naked picture of some girl. Some total stranger, whom I’ve never met, never will, and that he’s not even formally dating. She could be the chick sitting across from me on the 6 train this morning for all I know. Only I wouldn’t, because – mercifully – he put his thumb over her face. To protect her delicate virtue, obviously.

Anyhow, there it was: a push-up bra, underwear pulled down with her thumb on one side (vom), bathroom mirror-style selfie. Apparently, he gets a lot of those.

So do tons of guys I know, it seems. And though it’s far from shocking, I’m still disgusted every time I hear of a girl sending a sext photo to some dude. Why? Not because it’s exploitive (hey, if you want to put yourself on that level, that’s on you sista), but because she’s just making it too easy for him.

Hear that, ladies? Stop offering it up on an iPhone platter. It’s just. Too. Easy.

Not to mention, any female who sends a photo like this with the subject “For Your Eyes Only” (as was the case with this demure young lady) who doesn’t expect him to show it to a minimum of five of his buddies is outright f**king kidding herself. But that’s the point, I think – she doesn’t care if it’s put on display – either that or she’s just really, really naive.

So, this leads me to my next point, gentlemen. Even though you know it already, and even though it sounds like something your mom would say, you don’t want these girls. Granted, I understand the power of a good boob shot (or worse), and I know that most guys won’t pass up an obvious invitation like this if they’re just looking to have some fun. But I wish they would, and here’s why.

Because the woman who sends naked selfies smacks of one of two things: either a lack of self-confidence, or outright vanity.

For the former, who wants a chick that doesn’t think she can get a guy’s attention any other way than by flashing some areola? Because that’s why she went that route – it’s her most powerful card, and maybe her only one. And for the latter, if she likes her bangin’ body enough to hand out thong pics like business cards, how many other guys do you think have gotten the same photo? And taken her up on the offer? You can jump on that, too. Just make sure to pick up some Penicillin on your way home, bro. 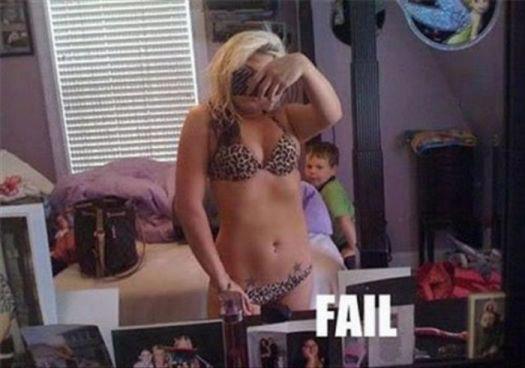 As for the ladies… Sigh… Ladies, PLEASE. Where’s the mystery?

Part of the excitement in getting to know someone new – emotionally and physically – is that you keep peeling back the layers and discovering more things about them. Even if it’s short-lived, it’s still fun to draw out the anticipation. But when you offer yourself up like some pixelated tart, it’s not just cheap, it’s anti-climactic.

Ensuring your sexuality is part of your appeal is important – vital even – but you don’t want it to be your only form of currency. It should be one of the many things about you that he finds intriguing. Not the sole draw.

An ass – even a fine one – gets boring eventually if there isn’t a thought-filled head three feet above it. Trust me.

In closing, I’ll put two final things to bed, just in case you were wondering (no pun intended.) First, this argument doesn’t apply to people who are in serious relationships. Presumably, at that point your partner has deemed you valuable in other ways that don’t involve your rack, so titillate away my friends. There’s no harm in keeping things interesting.

And secondly, no – I’ve never sent a photo like this of myself to anyone. Ever. Honestly. Partially because I think a seductive message of the here’s-what-you’re-in-for-when-you-come-home variety is equally effective, and partially because I have a deep and abiding fear of lost phones ending up in the wrong hands.

So, yeah. Miss Wingman locks down the sexual tension in other ways, thank you very much. And the rest of you should, too.