BREAKING: Science can now confirm what everyone already knew – that men are Pervy McSexersons when looking at photos of womens’ bodies. Or at least, that they spend way more time checking out the breasts/hips portion of the pictures than the females’ actual faces. Because, you know, who actually cares what our smile looks like or if we have kind eyes?

And speaking of eyes, that’s how researchers at the University of Nebraska – Lincoln came to prove this long suspected theory – by using eye tracking technology to gauge where their participants’ eyes lingered when shown photos of various women. Even when the men were told to focus more on evaluating a woman’s expressions and personality, women with more curves get more positive personality ratings. Shocking, I know.

But seriously, I don’t know why anyone’s even bothering to act outraged, disappointed or surprised by this study (ahem, looking at you, Jezebel.) Dudes ogling womens’ figures? That doesn’t make you a creep, gentlemen, that’s just because science. Duh.

Kidding, you’re definitely not off the hook. The study doesn’t delve into the reasons why men engage in this oh so upstanding don’t-care-what-your-face-looks-like-only-your-ass behavior, and it doesn’t give you an excuse. It just puts actual data behind this theory, which has been self-reported and long held by women.

So does this mean we should stop spending money on teeth whitening strips, smoky eyeshadow and expensive haircuts, since none of you A-holes care about that anyway? Hardly. At least not in this girl’s opinion. I do those things because I take pride in my appearance. But I can’t say I’m not going to do an extra set of squats at the gym later, either. 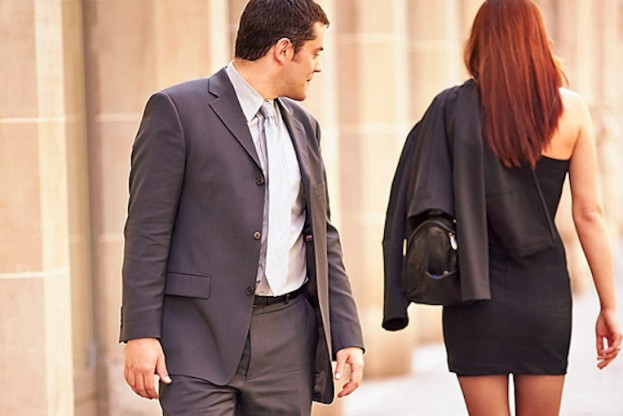 For the record, the study showed that women also stared longer at the females’ figures than at their faces. Though for entirely different reasons, one would assume.

While researchers posited that the men’s motivations were because of societal sexual objectification of women or because, evolutionarily, they gravitate to more shapely women “for childbearing” reasons (coughBULLSHITcough), women were simply checking out their competition. Which I totally believe, because we scope the shit out of each other all the time.

If eye movements are difficult to inhibit, then a lot of you need to work on your subtlety, boys. Because unabashed scoping may be acceptable for science, but not so much on the sidewalk.

It bears mentioning that these findings, published in the journal Sex Roles, only included a survey of 29 women and 36 men in total. So basically, I could find a more representative population in this Starbucks right now. That’s hardly exhaustive.

Then again, I also don’t need science to tell me what anyone with a pair of breasts and a tendency to wear skirts could’ve told you ages ago. We prove it every day.