In arguably the most ridiculous story to emerge lately, the crackerjack team of journalists over at the New York Post just released, “Hipster Wannabes Get Facial Hair Implants,” where they try to convince the rest of us that dudes everywhere are digging this new “trend” in male grooming.

Hang on a second, I have to finish snort-laughing…

OK, I’m done now. The verdict’s still out on what part of this article is more implausible – the fact that they claim that men are rushing to plunk down $8G’s for a procedure designed to make beards appear fuller and less patchy, or that they want us to believe that Brooklyn guys are leading the charge. Specifically, dudes in Williamsburg, Park Slope and Bushwick. In other words, the same neighborhoods where dudes will give you side eye for ordering a bourgie drink instead of a $2 Schlitz or some obscure German craft beer no one’s ever heard of (because PBR’s for mainstreamers and bros, duh.)

True, a quick stroll around the B-K will confirm that every dude looks like a Mumford & Sons/Brawny Man hybrid, complete with requisite facial scruff, but still – no one’s buying that the trend flourishes there. Or that it’s even a trend. Just because Brooklyn’s the epicenter of non-conformity cloaked in conformist, buffalo plaid clothes, doesn’t mean you can leverage it for your own plastic surgeon-subsidized agenda, NY Post and DNA Info. I never thought I’d say this, but  leave the hipsters alone. 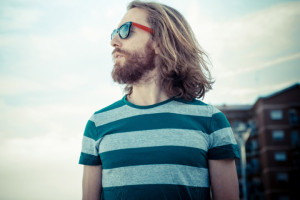 Further, I’ve never heard any female lament that a dude’s forest of facial hair wasn’t lush enough, or that it’s patchy. Ever. Most of us don’t care whether your beard is James Franco in “Pineapple Express” deficient or not – in fact beards tear the hell out of our delicate skin. Entire businesses have been created to prevent such chafing (The Soft Goat, anyone?), so why would we buy that men are follicle freaking out on our accounts?

Because “Beards are an important male identifier,” according to  the medical expert quoted. Wouldn’t that contradict the idea that Brooklyn is the home of facial hair implant zealotry, since men there wear jeans designed to fit 12-year-old girls? That’s right, Post. Nailed it.

In the event any of you were contemplating joining the “2 or 3″ men a week (a soaring population!) who’ve been jumping on the bespoke beard bandwagon, perhaps it’s better to think twice. Eight thousand dollars is a steep price to pay to look rugged. And besides, think of how much Schlitz you could buy with that money…