It’s good to know that charitable foundations are spending time on the really important things, like effing up your sex life.

That’s right, gentlemen, you now have The Bill & Melinda Gates Foundation to thank for new condom innovations that will leave dudes everywhere without an excuse to not wear a bag. Ever again.

See? Philanthropy can be used for feeding the poor, educating the masses AND C-blocking you. Literally.

But in all seriousness, faced with the global problem of eliminating sexually transmitted viruses, the spread of HIV and unwanted pregnancies, the Gates Foundation challenged scientists to design a condom that men and women would actually want to use. They aimed to develop one that men would hardly notice, but would still be strong enough to prevent the passing of pathogens. The winners were just announced, and the results were of the innovation level one would expect. Which is to say, pretty f&%king impressive. 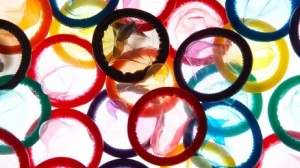 So what can dudes expect to be donning on their D? How about a condom with easy pull on tabs that snaps open and slides on like a sock over a foot, thereby eliminating any fumbling around in the dark. Or, one made of beef tendon-based collagen that feels like actual skin, not like a synthetic rubber barrier. Or even one that contracts to fit your, um, member like shrink wrap upon heat activation. I know. That shit cray.

Luckily, these reinvented condoms won’t be for sale for a little over a year, so you have some time left to whine about how they kill the sensation, are too tight (Hahaha. Wait…hahaha), or that you just don’t have one handy. Until then, happy wrapping, boys.