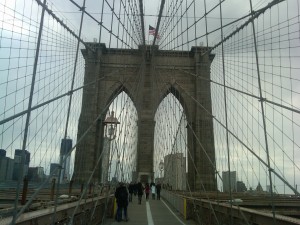 Thank God It’s Friday, y’all. Or more accurately, “thank God you’re not this guy.” Because I felt it was unfair to make anyone’s tale of dating woe follow last week’s act (the bar is officially set, good luck kids), I decided to post about this recent news story. It also involves woe, just more along the “Whoa!” lines instead. This is an Online Dating Horror Story for the record books, and it’s playing out as we speak.

In case you haven’t seen the remarkable tale of the “Spreadsheet Guy,” it goes like this: An investment banker who was dating several people he met on Match.com, as well as some he was introduced to by family and friends, created an Excel spreadsheet to keep track of everyone. Or more accurately, to keep track of every little meticulous detail of their interactions (or misses), ranked their appearances, and made notes about whether to monitor casually or closely. Oh, and he included little gem comments like “very jappy, one and done for me,” too. Wicked classy.

But the real kicker? Investment Banker Guy (who’s real name is David Merkur, a fact that has been splashed gleefully everywhere by news outlets) then made his biggest mistake by sending it to one of the girls he was dating. He’d mentioned that he kept track of his dates via spreadsheet, she asked to see it, and for some unknown reason, he obliged (?!). Then, she not only sent it to all of her friends in an email titled “Monday Morning Entertainment,” but it ended up on Deadspin, Jezebel, Dealbreaker, the NY Post – I think I even saw it on ABC news this morning.

Jesus. Christ. Who does that? 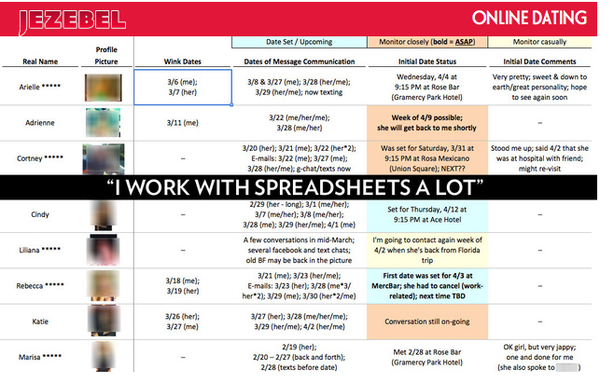 “Who does what?” you ask, the making the spread sheet part, or the leaking it so that it goes viral part? BOTH. First things first, you should check out the complete document in question here. But secondly, I think the thing that most people are missing while they focus on the deplorable – not to mention douchey – behavior of Spreadsheet Guy (way to break the “finance guys are a**holes” stereotype, dude) is that the girl who leaked this just flat-out ruined his life. I’m not one to defend men for their slimy behavior, obviously I’m a vocal critic, but in this instance I think the punishment isn’t befitting of the Microsoft Office crime.

When did it become OK to destroy someone’s reputation for your entertainment and that of your clique? I would’ve been amused by one of my friends telling me about her date keeping a spreadsheet so that our closed circle could laugh about it and shake our heads in disbelief. PRIVATELY. Over dinner, or while killing bottles of wine and cackling about how guys do stupid things (sorry boys), but nothing farther. This girl had to know that it would blow up, she can’t be that naive.

But when national news outlets devote airtime to it (let alone while it’s an election year, gas costs more than $4, there’s a racially-charged murder trial on deck and we’ve got Obama’s Secret Service agents throwing hooker and blow parties), that’s where I draw the line. Not to mention the fact that other women on the list have had their full names leaked, and have now been thrown unwittingly into this mess. One of them is even taking legal action against the girl who leaked the story. (*Miss Wingman note: He called the litigious chick a 9.5 and now she’s getting inundated because of her beauty, my sincerest sympathy, really).

Back to the guy in question, though. I think there are 3 things in play here: 1) That his behavior was fundamentally creepy in it’s organization and detail, yes, but it was possibly born from necessity. He’s not the only one to ever juggle so many dates that he needs to keep track of them. It’s not my favorite method, but if it helps you keep track, then fine. It’s better than mixing girls up I suppose.

And the looks rating? It’s nothing that all guys don’t do mentally, anyway, sorry to break it to the appalled women out there. They just don’t usually write it down. Still, he would probably have more luck finding love if he’d just focus on one person (not that he’ll be able to find one now). This point is hammered home in this stellar article, “In Defense of the Dating Spreadsheet.”

Secondly, this girl shouldn’t want to date him, not because he made the spreadsheet, but because he was just stupid enough to actually show it to someone. And he’s managing people’s money? God help us all. If you want to keep track of your prospects, be my guest (PS call me old fashioned, but I’d never, ever date a man like this. Multi-taskers aren’t big on my list). But just don’t, under any circumstances, admit to having it. Let alone show it to someone else. Least of all someone you’re dating. Looks like someone was absent the day they gave out common sense…

And finally – this story just illustrates how hypocritical we all are. We want to find love, but we think it should be the kind of love we see in the movies. We know that we should put ourselves out there to increase our chances, but as soon as someone starts treating romance like a business, we recoil in disgust.

I’m not a proponent of reading books that teach us tricks and gimmicks on how to ensnare the opposite sex, I’m advocating getting out of your own way long enough to create opportunities to make a connection. Sometimes – correction, most times – having no game is the best game. Sincerity is a lost art form.

As much as we’d like to think that the moment cupid finds us will be accompanied by swelling music and a slow dissolve, a la Ryan Gosling flick, the reality will be slightly more complicated (though no less majestic, I hope). Timing is everything, and as much as we’d like to think we find “it,” in reality I think “it” finds you. All you can do in the meantime is sit tight and work on yourself, be hopeful and optimistic…

And for God’s sake, lose the spreadsheet.