I hear it all the time. “Why do women only like jerks?”

It’s the battle cry of nice guys everywhere lamenting their sweetness stigma. Treat a girl like gold and she walks all over you. She loses interest. She tells her friends she’s just not that into you. Make yourself inaccessible, mysterious and aloof, and BAM! She’s all over you. Ignore us and we’re giddy, be a player and we drool. It defies logic. It sucks. And also, it’s mostly your fault.

There’s a difference between being a good guy and being a Nice Guy. Good guys are decent, know they can get laid by other women, but still choose to be with us (swoon). Nice Guys don’t exude the confidence we look for telling us that they’re a catch. Nice guys put it all out there too soon, don’t leave us with anything more to learn about you down the line, and usually go home alone. But it doesn’t have to be that way.

In order to determine the exact right equation for precisely how much Jerk + Nice Guy = You Getting The Girl, first we have to start with the basics, boys. And that all centers around one indisputable fact: There are two kinds of women out there. Those that have learned-slash-matured, and those that haven’t yet.

In the spirit of female camaraderie, I’ll add this disclaimer…No judgment regarding the latter group. None whatsoever. It’s just that whether your nice guy ways bore us or bait us has everything to do with what side of the invisible line that divides every female’s dating life we happen to be on.

In the simplest of terms, it’s not you, it’s us.

When we’re younger, we love the chase. The “Does he or doesn’t he like me?” intrigue. The sick challenge of whether we can be the one to capture your full attention and reform you, or whether you’ll cling to your bad boy ways. Let’s face it, broads dig the drama. (I know, I know, we suck). But at some point, whether it’s in our late 20s, early 30s, or just after we’ve endured one too many crying sessions, we throw in the towel and put both feet over the line.

From then on, if you dog us, lead us on or just don’t appreciate what we have to offer, you’re dead where you stand. Dating roadkill, it’s true. You can be as much of a nice guy as you’d like, because we’ll just keep lapping up how fantastic a guy you are, lucky for us. We’ll never look back or stop to pine away over the jerks in our rear view mirror. The trick is knowing which side of the line the girl you’re into is on, and only you can be the judge of that.

But then, most of you won’t encounter this evolved type of girl in your daily dating lives anyway. Unless you were born before 1985. So for those of you still dabbling in the former group, here’s what you need to know about mastering the nice guy handicap.

*Always start out nice. When first we encounter you, be on your best behavior. Seem engaged in our conversation, interested in our company, and generally just be yourself. We need this initial reassurance to want to pursue something romantic. Then after you’ve gotten our attention, you can always dial back on the good guy routine.

*Be available, but not too available. There’s a fine line between making us feel like a priority, and making us feel like the only thing you have going on in your life. When planning a date, get at least one face-to-face in the books. This gives us just enough of a sense of who you are to get us hooked. But the next time we try to arrange a meet up? Be busy. Tell us you’ve got a work thing, you’ve got a friend’s dinner, whatever. Then suggest another day, perhaps next week.

Just leave us anxiously waiting to see you again (but not for too long), so that when we finally do, we’re excited. Try to always leave us wanting more. And it wouldn’t hurt to be the first one to call it a night, either. 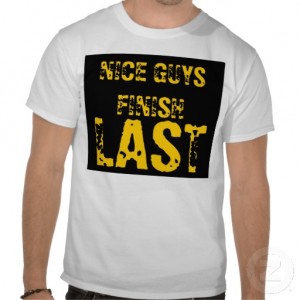 *Remember the big things, like what our siblings’ names are, but forget the little things - like how we went to a wedding last weekend out of town. Oh, you did? Oh I hadn’t even noticed that we didn’t speak, I was too busy having a fun weekend with my friends. Oh right, you did say something about that. It’s not like I was sitting around wondering how many of the groom’s single friends you were dancing with and when you’d be back home or anything…

Repeat after me, boys. Play. It. Cool.

*Text, don’t call AT FIRST. But after you’ve hooked up? Call, don’t text. This shows you respect us. Also, ask us about our day when we do speak. It shows that you care what’s going on in our world. But make sure to space those calls out, and let us be surprised to hear from you when we do. Absence makes the heart grow fonder. Also, it makes us wonder what the hell you’re up to or if you’re thinking about us, too.

*Introduce us to your best friend, but make sure we see that your other friends (read: female “friends”) are an active presence on your Facebook page. Women always want what other women covet, and your appeal will skyrocket if you seem like there are other prospects circling you, too.

*This goes double for your phone and our perception of your dating life. It wouldn’t hurt if you appear to receive a text or two while you’re with us, even if that text was pre-arranged with a buddy or comes in the form of a work email. Allow me to clarify: I don’t want you to actually BE texting other girls or multi-tasking other females at the same time that you’re pursuing us. But it won’t kill us if we wondered if you were. In a non-possessive, psycho way, of course.

Striking the right balance to get us hooked on you is all about figuring out just how much “jerk” to inject into the nice, respectful routine. Not the other way around. I repeat: NOT THE OTHER WAY AROUND. Because in the end, if you’re too much of a prick, i.e. treating us poorly when we’re together, the only girl that’ll be responsive to that is one with fundamental self-esteem issues. She’ll seek your approval because she lacks confidence, and derives much of her worth from other people. Yikes…major yikes.

The girl that lets you be too much of a jerk feeds off of drama, and not to sound like your mother, but you don’t want those girls anyway.

So don’t sweat the nice guy label, unless you’re only in it for the one-and-done hook up. In that case, D-bag away my friend, because tons of women fall for that shiz every day. But it’s beneath you, or at least it should be. The wise man knows when it’s time to grow up.

And hey, there are always outliers. My own personal dating experience strongly rebuffs the conventional wisdom that nice guys finish last, as every one of my ex-boyfriends have been bona fide sweethearts, total gentlemen and nice guys to the core. (Well, not every single one, a bad apple or two may have snuck in, but only by accident). But, I realize that this anomaly is the exception and not the rule, so ignore my penchant for good guys and stick to the advice above.

Whatever you do, recognize that we only get bored when we feel like it’s too easy. And hey – you guys should be familiar with that notion, you’re the ones who perfected it. So keep us guessing, keep us hungry, but keep being (sorta) sweet, too.

Because dating isn’t a sprint, it’s a marathon, and you’ll want to have some nice guy gas left in the tank when we finally step over that line.