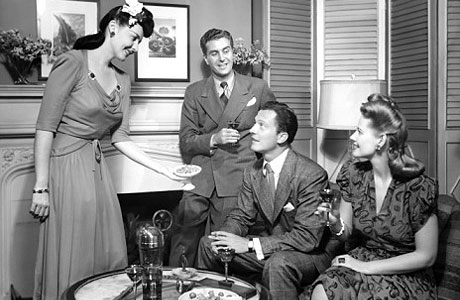 Congrats, bro. Somewhere between grinding to Kesha and Pitbull and spilling no less than four Fireball shots on your sweater, you met a girl at that holiday party. And if memory serves, she was pretty cute. Unless that’s the Fireball talking – which is a distinct possibility. But you got her number anyway, good for you.

Whether you realize it or not, holiday party hookups (or potential hookups) come with a slightly different set of guidelines than your run of the mill encounter. Why? Because if you don’t act on it fast enough – the right way – you miss out on the chance to turn it into something more (a New Year’s Date perhaps?) So observe the following:

Hit her up before the actual holiday. Chances are, one or both of you will be traveling for at least a few days, more if you have vacation time. This means if you don’t send that “Hey, it’s so-and-so from the other night, wanna grab a drink this week?” text soon, you’ll miss out on a crucial window to see if she really is as cool as you remember. Digit exchanges come with a shelf life, after all.

And even if you’re slammed with work and tying up loose ends before the end of the year (as many of us are), you can always drop a “Really enjoyed meeting you the other night. Things are kinda chaotic right now but would love to grab a drink after New Years if you’re down?” message. It’ll keep you in the game, and show her that you haven’t lost interest.

Confirm basic information. Like, for instance, her name. “Karen” and “Karly” aren’t interchangeable, no matter how many eggnogs you threw back. Also, remind her who you were (“Hey it’s Ryan, the charming, handsome guy in the red pants…” *Also, don’t wear red pants). Dudes aren’t the only ones who work multiple leads at at time, sorry.

And finally, approach it with a clean slate. There’s something about fancy clothing and flowing liquor that makes people do crazy things. So if she – or you – did anything embarrassing or said something questionable, disregard it. We promise not to hold spilling a glass of mulled wine on our favorite skirt against you, if you cut us some slack for ignoring you while tending to our too-drunk friend.

Flirting. It’s a delicate art. When done correctly, it can be playful and intriguing. But, when done poorly, it can come off as creepy, uncomfortable, or resemble a Tourettes-like seizure in a public place. And which side of the line you land on, I’m afraid, is entirely up to you.

That’s why I’ve come to your rescue, single men of the world, to streamline a potentially awkward process. It’s been brought to my attention that there’s a new trend that’s being touted as “the future of flirting,” but God help us all if that’s true. I haven’t seen anything this cheesy since Velveeta in the blue box was introduced.

Suffice it to say, boys, that if I were a guy and some woman did this to me, I’d think she was a few colors shy of a full Crayola box. Or the type of chick who watches a lot of Lifetime Television for Women.

So what’s all the fuss about? There’s a company called FlipMe that allows women to order a set of small cards to pass along to any men with whom they’d like to flirt. The cards have silly phrases on them, like “The night just took a turn…” or “I’m playing easy to get.” Or even the ridiculously obvious, “You’re being hit on” card, for the dude who doesn’t quite grasp subtlety yet.

Each card comes with a unique code on it that allows the recipient to visit the site, log in and view the woman’s profile, which she’s set up prior to the exchange. Then, hypothetically, she can either contact him or not – though it’s not entirely clear what the man is supposed to do once he’s viewed her page.

FlipMe describes itself as being your “go-to gal pal” and making things mysterious and fun. That might be the case, I suppose… if the people who’re flirting are in the 7th grade.

Here’s the thing, men: A lot of times, women think we’re being cute and coy, and you guys either A) don’t agree and are horrified or B) don’t pick up on it, and it’s entirely lost on you. So utilizing a service which is essentially the adult equivalent of passing some stranger a note in class that says, “Do you like me? Check one box. YES___ or NO ___” is a little juvenile, no?

I totally understand why, from a safety stand point, a woman would be hesitant to give out her business card or personal information. That’s a concern that you men rarely think about, but is often in the back of our heads (a result of watching too many “48 Hours Mysteries” and “Dateline,” no doubt). But there are other ways to get someone’s attention, and then you can decide if they seem “safe” enough to exchange biographical information later.

But, they require that you actually have a conversation, and not just that you drop a purple, swirly card in front of them and then dash for the door while the guy is still trying to process what the hell just happened.

I’m all for initiating contact if you notice someone you find attractive, especially someone that you seemingly might never run into again barring a twist of fate. Think about it – how many times have you been on a subway, or paying for your morning coffee, or in line at the bank and you’ve spotted someone cute that you’d like to get to know? But do you talk to them? Walk over and introduce yourself? Smile and hope they smile back?

No. Most of the time, you just steal a few glances and then let them walk out of your life forever. Like a wuss. Like a coward. Like a scaredy cat (thanks for bringing that phrase back, RW, it’s awesomely under-utilized).

So what should you do, you ask? Well for starters, smile at us. And hold eye contact for a few seconds. Not in a creepy, now-we-have-to-go-find-security-and-ask-for-help kind of way, but in a “Yes, I noticed you, and I think you’re cute” kind of way. I say this all the time – whether it’s in the grocery store, a book store, at the gym, etc etc etc, smiling is one of the most disarming things people can do. We should all use it more often.

Then, if she smiles back, casually make your way over to where she is – but don’t beeline right for her. Maintain a healthy, arm’s length distance away so that you show her that you respect her personal space. Then – and this is the real shocker, boys – just say “hi.” If you’re feeling especially brave, you can quickly follow it up with, “I’m _____ (so and so),” but only if you’re feeling crazy that day.

Name introductions, who would’ve thought, right? Such a novel approach, but simple and non-threatening…which should be your aim in such instances.

After that, you can come up with a million things to say based on the environment you’re in (refer to Miss Wingman’s suggestions if you’re at a loss). Or, it can be something as multi-purpose as, “I don’t mean to bother you, I just noticed you and wanted to come say hello.” Right away you’ve told us that you not only have self-awareness (and recognize that a cold approach is unconventional), but also that you’re flattering us, and that you’ve removed the onus from of us in reaching out.

I don’t envy dudes for having to take the social bullet for us all the time, but in the end it just comes down to this: You’re men, it’s your job. Take a deep breath and seize the opportunity when it arises. Confidence is sexy, it’ll liven up your boring day, and you might meet someone new as a result. Plus, if you don’t, no one will ever sack up and meet each other organically ever again. It’ll be all fix ups and online profiles (which are great for my literary purposes, but far less exciting and spontaneous for all of you).

Or if not, some foolish and impressionable women will be forced to pass you a silly card, enticing you to some sort of romantic scavenger hunt, where the prize at the end may or may not be her vajayjay. Awesome. But, if you don’t have time or tolerance for that type of BS, take my advice and just come say hello. You may still come away with some digits in the end, but at least this time they’ll be the right kind.