(Taps the mic) Is this thing on?

Listen up, men of the world. Miss Wingman is all for praise and patting you on the back for having good manners, decent style or even superior pick up skills, but sometimes I have to put my foot down.

And speaking of feet, we need to talk.

Now that the mercury is rising (or more accurately, assaulting the hell out of us) there are a few things you boys need to be aware of in the grooming department. Why? Because summer is rife with opportunities for picking up women. Roof top parties, backyard barbecues, ball games, weddings, concerts – it’s like shooting fish in a barrel. So why would you voluntarily blow your chances with a girl by committing one of these highly unsavory faux pas?

You wouldn’t, at least not if I can help it.

But getting back to the feet thing – or rather, toenail thing – let’s be real here. I’m horrified that I have to write about something so vile, but apparently dudes are not getting the memo that having feet that resemble talons is highly unsexy to most females. Strike that – to all females. 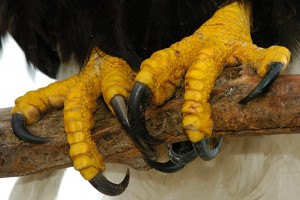 Common sense dictates that if the weather is warm enough for you to ditch socks and shoes in favor of some flip flop action (*Miss Wingman note: Notice I didn’t say “sandal” action. I’m strongly anti-Mandals), then your toes will be on display for all the world to see.

So please, for the love of God, put the “man” back in “manicure” and clean your act up, boys.

Use some clippers, trim some hair, hell – even throw on some moisturizer if you’re feeling a little crazy that day. Just do some maintenance, I beg of you. I’m not suggesting you hit up a nail salon (Women judge you for that. Don’t let any of them tell you differently), but sometimes a professional is required to work that sh*t out. Do what you must, we’ll look the other way.

And if you do all that and your little piggies still look like they didn’t only go to the market, but they also got run over by an 18-wheeler on the way home, then perhaps opt for some closed-toe shoes instead. Sperry’s or Converse are a solid summer substitute.

One last thing to really nail my point home (pun intended!). This goes for fingernails, too. If I had a dollar for every time I was on the subway and I saw a guy grab the pole with fingernails so long they could only be suitable for drug sniffing, well…I wouldn’t have to take the subway, let’s just put it that way. I’ve said it before and I’ll say it again: no one wants to look like Wolverine, and women don’t want to date that, either (unless we’re talking about Hugh Jackman).

Onto the issue of sweating. No one’s arguing that there are few things that suck harder than being forced to wear a suit on a sweltering day. I have the utmost sympathy for corporate-types in heat waves, I assure you. But if you’re not donning your office best (or if you have a job with a particularly casual-slash-liberal dress code) take this hot weather fashion suggestion: Just wear a white T-shirt. Hear that boys? Just a plain, crisp, white tee. 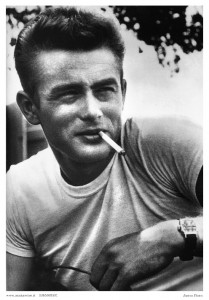 Why? Because it’s classic (hey it worked for James Dean didn’t it?) but more importantly it masks your enormous sweat stains. Sure, they might still be there, but at least we can’t see them. Not a huge revelation, but an important one.

And finally – the topic of eyewear. Miss Wingman will do a full rundown of female-friendly frame styles down the road, but in the meantime just take this advice: No one should ever wear a sunglasses strap (otherwise known as Croakies). Ever. Under any circumstances. Not even if you’re a sport fisherman on the Discovery Channel. 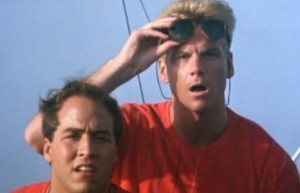 True story: when I first started dating a former boyfriend, he owned this heinous accessory. Upon discovering it, I promptly made it disappear, and would keep hiding it every time it resurfaced. Why? Because it looks ridiculous. What are you really telling the world when you wear it, that you can’t be bothered to put your shades in your pocket when you take them off? Is the weather that blustery that they’re at risk of just flying right off your face?

My hatred of Croakies is second only to my disdain for Crocs, but I’m not alone in that sentiment. Sure there will be men among you who will plead your pro-Croakies case, but trust me on this one – we hate them.

So that’s it – warm weather wisdom for wooing women. (I should get an award for most alliteration for that sentence). I’ve sacrificed my eyesight for the greater good, but I did it out of love. Ever tried to Google image search “long fingernails”? You can’t un-see that stuff. Now kindly heed these suggestions in your pursuit of a summer romance. And remember: You should always put your best foot forward with the ladies, but there’s nothing wrong with it being a well-manicured one.

Let’s face it, social networking is the best thing to happen to guys trying to get lucky since the invention of…well…women, frankly. With just a few keystrokes you have a bevvy of beautiful women who you either want to get to know, already know, or never knew you wanted to sleep with until now. It’s a world of possibility at your fingertips – literally.

But, just as social networking sites like Facebook work in your favor, they can also work against you if you don’t know what to avoid (sorry, blame Zuckerberg). Whether it’s you who’s engaging in marks of bad behavior or your friends/past relations working against you, it doesn’t really matter – it’s all filed under the heading “game killer” in the end. As I’ve said before, women have a tendency to e-stalk, so if she unearths any of the following on your profile, don’t be surprised if she starts running for the virtual hills.

Cringe-Worthy Photos: There are so many things that fall under this category, I hardly know where to begin. Oh no wait – yes I do – with anything that involves vomit, bodily functions, shotgunning/funneling beer over the age of 25, shirtless poses in bathroom mirrors or photos of you flexing in any way, shape or form. What this tells us? You’re either still pretty immature, don’t realize that you’re a narcissist, or that you have no understanding of/concern for the Internet and all that lives on it. And this is coming from a girl who’s own male friends’ immature behavior is a source of much entertainment. I may laugh, I just won’t date you. Also, I don’t care if you have The Situation’s abs, put a shirt on please.

Debbie Downer Status Updates: No one likes a person who’s negative all the time, and this goes double for Facebook. Are you constantly complaining about your life? Do you let little, fickle things get to you or love unleashing your rage to your social network? Lighten up, man. Glass half full is way sexier. I guarantee you that if you’re the All Misery All The Time Network, we’ll want to change the channel. Fast.

Friend Poaching: Under no circumstances is it acceptable for you to reach out to people on our lists and friend request total strangers. If you know our friends, that’s one thing (but still dicey, only add them if you’re certain you’re close enough for it not to be weird). Otherwise it just looks like you’re either A) potentially trying to get with our friends if it doesn’t work out B) trying to keep tabs on us and who we’re out with or C) just a social-climbing opportunist – but that one’s primarily for girls, it rarely goes the other way.

A Visible Imprint of Your Ex: Guys who keep pictures of their ex on their Facebook are a huge red flag for us. It’s understandable if you’ve just recently broken up and she was a large part of your life for an extended time, and you haven’t had a chance to pull them down yet. But once that time is up, if you want to move on and have a fighting chance with new girls, you should probably ditch the vacation shots, arm around each other photos or anything that screams that you used to sleep with another woman. Just a suggestion.

Any Women Who Like To “Hover” On Your Page: As I’ve also said before, women have a tendency to mark their territory by writing on your Facebook wall and other such stupid acts of possessiveness. It’s not terribly mature, but it’s common practice – and it’s meant to ward off other females. By constantly “Like”-ing your photos, commenting on your status updates or posting things on your wall like it’s her own personal doodle pad, women are trying to establish themselves as a formidable presence in your life, even if you don’t feel the same way. These actions are off-putting to normal girls, who will likely bow out before trying to engage in competition for your affection. Sad but true.

And finally, Annoying Relationship Blasts Of Any Kind: This usually applies to guys who fall hard for girls way too easily and then have things like the following written on their pages: “In a relationship” as their status after one or two dates, photos of them wearing matching sports gear with a girl at a game, references to having “the best girlfriend in the whole world,” etc., etc., gag. Also falling in this category are things written by a female you may or may not be formally dating, like “Hiiiiiiiiiiiiiiii” or “Miss youuuu!!” or “Can’t wait to see you,” “Awwwww, you look so cute in this pic!” or anything that emasculates you publicly. Also, it will have us thinking that if you could ever have been attracted to such a complete tool (if girls can even be called that, which I believe they can) then there’s no way you belong with us, we’re better off.

I know some of this sounds harsh, but it’s for your own good, men. If Miss Wingman is all about creating opportunities to showcase to us how great you are, then committing the sins on this list only make you get in your own way. A Facebook faux pas may not seem like a big deal, but it doesn’t help you out, either. Just remember these reminders when you sign on, or else the next time you may find the ladies logging on and losing interest.

*And yes, before you point it out, the quality on this clip is bootleg, at best. Sometimes Youtube videos are pretty hoopty. Sigh…