New York Fashion Week’s finally over, which means the women of Manhattan can stop sucking in, everyone can start nursing their event hangovers, and Miss Wingman can once again walk down the street without feeling like an oompa loompa in a sea of beautiful, leggy amazons.

For the guys, some of you may be wondering what men’s trends came out of the model melee (um, in between watching NFL games and postseason baseball, obviously.) So, just in case you gentlemen were thinking of taking some fashion risks with your Spring/Summer 2014 looks, you might want to think twice before you try out these emerging trends.

Not because the designers aren’t all talented in their own rights, but because they’re not creating clothing for straight men looking to attract hetero females.

Or not-so hetero, whatever you’re into.

Thus, here are the 8 worst men’s Fashion Week trends to avoid, if you value your sex life. Because yes, every girl is crazy about a sharp dressed man, but this shit is ridiculous. 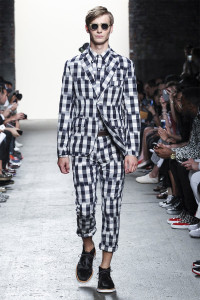 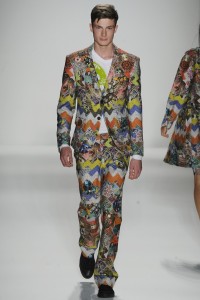 Patterned suits. If you believe people like Mark McNairy (who I normally love, sigh..) and designer Libertine, the louder the better. But if you believe the rest of the female population, we wouldn’t be caught dead walking alongside you in this. 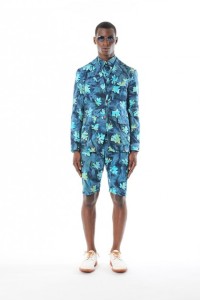 Or this, for that matter. Shorter fabric on the legs doesn’t make it any less visually offensive or vagina repellent, sorry. And while we’re on McNairy, this other runway masterpiece… 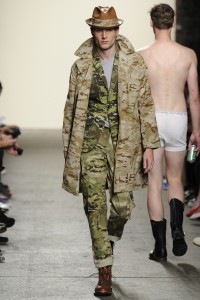 Head to toe camouflage. To be fair, I’m not anti-camo. But I am anti- guys dressing like a Navy SEAL lying in a remote swamp waiting to put down a guerilla insurgency. This is far from acceptable streetwear. On the upside, you won’t get made fun of because no one will be able to see you. But on the downside, women will think you’re an extra from “Tropic Thunder.” 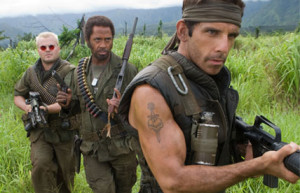 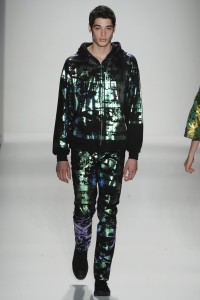 Iridescent metallics. Unless you work at a futuristic, sci-fi themed restaurant and are forced to accessorize this with an alien head mask, there is no earthly reason (zing!) to rock this look. On any planet. 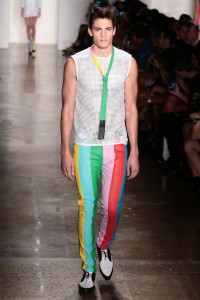 Bold pants. Remember the color bars that come on during a network TV outage? Yeah, so does designer Jeremy Scott. But sorry bro, they don’t look so hot wrapped around your glutes. (Or with a mesh shirt and Flock of Seagulls hairdo, for that matter. Scratch that – a Flock of Seagulls hairdo is EXACTLY what you’d be expected to wear along with those pants.)

Sure, we all loved the circus as kids, but no need to bring the Big Top back in your trouser selection. And yes, I just said “trousers.” Because I’m geriatric. 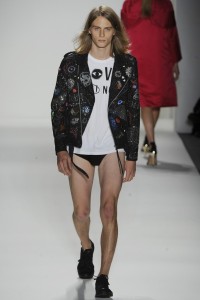 The “Pants? Who needs ‘em!” look. But don’t make the mistake of being so worried about ugly pants that you forego them altogether. Because seriously, man. Put some f**king pants on. 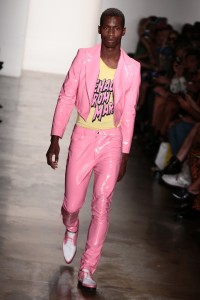 But not if they look like this. Sure, dudes can wear pink. If Mark Sanchez can rock a headband, guys can certainly wear pink. What they can’t do, however, is don patent leather pants with a matching patent leather jacket. In any color. In public. Ever. 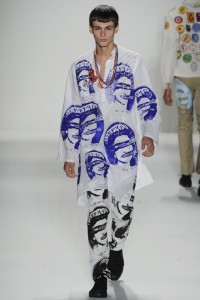 And lastly, whatever the f**k this is.

Maybe it’s because it’s a stenciled tunic. Or possibly, because it resembles pajamas. But whatever Libertine’s calling it, women definitely won’t want to crawl into bed with you if you wear it. But they might want to borrow your necklace.

They say beauty is the eye of the beholder, and I don’t disagree. With all due respect to Margaret Wolfe Hungerford though (who?), the qualities that make someone beautiful may vary, but what makes someone hot is static and far less ambiguous. On a week like this with the mercury rising, I might be the only one talking about a different kind of heat. Yes, people like to pretend that hotness really doesn’t matter, but those people would be wrong.

Sometimes what makes us attracted to someone is inexplicable – a weird formula unique for each of us. Sometimes, however, it’s universally obvious – therefore it warrants our attention. Just not our exclusive attention. But ignoring it altogether? Unrealistic, to say the least.

Miss Wingman can be accused of a lot of things, but not giving it to you straight and unflinchingly honest (at least I don’t flinch, I can’t always say the same for my audience) isn’t one of them. So then it’s time we tear down the I-don’t-want-people-to-judge-me formalities and stop walking on eggshells here. When it comes to getting a date or even starting a relationship with someone (let alone getting laid), how you look matters. A lot.

OK fine, maybe not a lot – for women, at least. But a fair amount. We do like to chat up guys who don’t look like mutants of course, and for obvious reasons. But we allow far more leeway in this area than you guys do. For men, what someone looks like is crucial upon first meeting or getting noticed. We know it, and you boys shouldn’t try to deny it. I will repeat, “upon first meeting,” though. So put away your torches, disband your lynch mobs, and kindly hear me out.

If you meet someone through anything other than a mutual source, who can vouch for the relative coolness of said female stranger, what’s going to make you want to stick around long enough to find out if it’s true?

We do it every day: get put into situations with people who are either really pleasant to look at, or about as compelling as an animated screen saver. Whether you give your attention to someone should depend entirely on what she has to say, but in reality it’ll likely be dictated by the curve of her hips or the outline of her face. Or in our case, a finely chiseled jaw line and Beckham abs.

Let me pare down this argument to avoid confusion though – I’m not talking about what would make you have a real relationship with someone, or even get married. Those are qualities that go far beyond exteriors and develop over time. I’m talking about what would make you initially take pause, and I’m here to say that you should want to be with a woman who puts some focus (but not all) on appearance. Yours, and her own. And here’s why:

Someone’s relative hotness changes our perception of them. It just does. (Or it seems, as in the “Moneyball” sense, your proximity to it). I’d be lying if I said there weren’t guys in my past whose dateability quotient went up after they hit the gym, paid more attention to grooming or generally started giving a damn about their reflection in the mirror. It doesn’t mean I wouldn’t have entertained the idea of them before, but it didn’t hurt their cause that I suddenly wanted to see what they looked like with their shirts off (sorry, mom and dad). So if putting a little focus on your ass(ets), god-given or otherwise, ups your stock, then I’m all for it.

Which brings me to my second point – you should want to be the best version of yourself that you can be, though not exactly in the Oprah sense. We can’t change our faces (naturally at least – cosmetic anything isn’t even part of this argument). God gave us what He gave us. But that doesn’t include unkempt hair that needs cutting or a body that hasn’t seen a weight bench since college. He didn’t give you that – you did it to yourselves. There’s a difference between maxing out your potential, and becoming obsessive. And it includes us women, too.

I think there’s nothing wrong with everyone – females included – wanting to get to a place where you feel really good about your appearance. So, if that means just hitting the gym to feel strong – not even model skinny – then do it.

I’m not pro-perfection, but I am pro-confidence. And feeling good about how you look gives you confidence, there’s no denying it. Likewise, anyone who says that they can be 100% happy if they don’t feel content with their appearance, I’m calling bullshit. It’s a fundamental part of who we are, like it or not. Try being in a relationship with someone who doesn’t feel good about themselves, insecurity causes erosion over time.

Further, being just flat out attracted to someone is important. Have you ever met someone and said, “This person is great on all levels but I just don’t want to sleep with them?” Yup. You can do or say everything right, but there is that undeniable “X” factor that has to be there. You have to feel like you want to tear someone’s clothes off at least some of the time (hopefully more), or else you’re going to lose interest.

Ideally there should be other factors contributing to someone’s sexiness that are more profound than superficial (read: intelligence or compassion), but we’re working on a micro level here, baby steps.

This is not to say that I’m justifying men lining up for only the smokin’ hot girls. Actually, this is a pretty strong endorsement of why you men shouldn’t date the hottest girl in the room, it’s a mistake. Why?

Because odds are she knows it.

This doesn’t mean she has no regard for the feelings of the men around her (she might be lovely, benefit of the doubt), it just means that at some point in her life – frequently, most likely – she has seen what her hotness can get her. And because of that, she’s avoided ever really having to contend with those realities that the rest of the population operate within on a daily basis. Plus, self-adoration and vanity are loathsome on anyone, male or female.

Over the years, I’ve spent time thinking I had only a little room for improvement, and time with damage control to do, and guess when I was happier and in an all-around better place? I’ve wondered if things didn’t work out with a guy because of incompatible personalities, and wondered if it was for more surface-level things. One is fairly easy to reconcile, the other isn’t.

Women agonize over appearance, way more than men realize. Think I’m lying? I read this story and was both horrified, and not shocked in the least. That’s not the mark of someone who feels good about themselves, that’s demented on levels I don’t ever want to understand. Yet it’s all in the pursuit of perfection and hotness, so remember what they say about moderation.

Then where does that leave us, to focus on hotness but not uber-hotness? Care about being attractive but only half way? No, not at all. We should care about our appearance, but only insofar as it relates to us feeling really, really good about ourselves.

I believe that how we feel on the inside is mirrored by what we look like outside – confidence is sexy – but there’s nothing wrong with a little maintenance or upgrade. And even if we can ignore that thing about ourselves that really bothers us, we can’t expect other people to do the blanket same. That’s not the way the world works.

Play up the good, mitigate the bad, but no matter what – own what you’ve got. And if you don’t like it, I get it. Just don’t blame me.

They don’t call it the ugly truth for nothing.