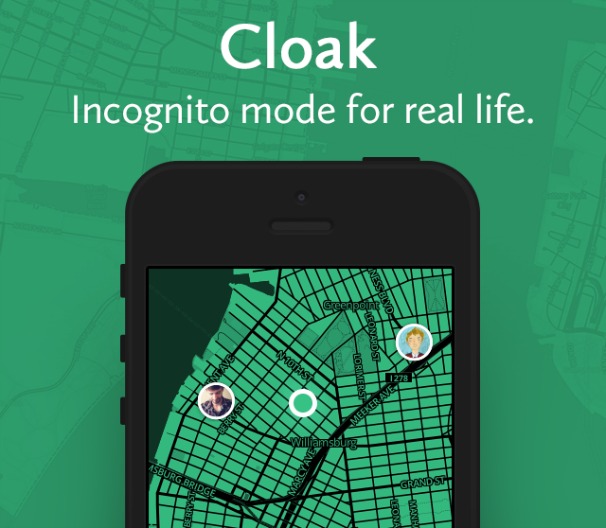 If all my exes lived in Texas, like the song says, I’d be stoked. But unfortunately for this New Yorker, (almost) all of my exes live in Manhattan.

But now I can stop living in perpetual fear that I’ll run into one of them on the 6 train whilst looking post-workout ugly (or worse, when they’re with The Woman Who Came After), because some dudes developed a new location-based avoidance app called Cloak. No, not “Cloak & Dagger” – I wish – that’d be even more awesome.

Billed as the “Anti-Social Network,” Cloak allows you to dodge exes, frenemies, or your coworkers when you’re playing hooky by combing their Instagram and Foursquare accounts for places they’ve recently checked in or taken photos. Cloak stores their profiles and notes your own location and proximity.

If you’re in danger of an unexpected face-to-face, the app sends you a warning message when the user comes within a certain radius. Then voila! You’re free to hightail it across town and immediately start sending, “Oh man, that would’ve sucked!” texts to all your bros. Crisis averted.

So who’re the minds behind this stealthy masterpiece? Developers Brian Moore and Chris Baker, and it was Moore who became fed up after running into his ex four times upon moving to NYC. Ouch. But, since being proactive is always better than reactive, Moore decided this city wasn’t big enough for both of them (Amen, brotha), and set about fixing it.

Granted, even though I’m on good terms with my exes – well, some of them, and some of them I’d just as soon lived on Mars instead of Manhattan – the idea of avoiding awkward encounters sounds good, but it can also be a double-edged sword.

On the one hand, it’s natural to want to pare down the amount of social ambushing we experience on any given day. Hell, I’ve started hiding half the people in my newsfeed lately because of their incessant oversharing. In that sense, eliminating drama makes total sense.

On the other hand, how one handles themselves when they’re confronted with these unexpected run-ins reveals a lot about their character. Sure, lobbing a grapefruit at someone who wronged you after you spot them in the produce section at Whole Foods seems appealing, but you’ll learn a lot more about yourself if you take a deep breath and just deal with it.

Eh, on second thought scratch that. Some faces are best just never to be seen again, high road or not. Avoid away, my friends.

The app has yet to integrate Facebook posts or Tweets into their geolocation tool, but it is currently available to iOS users. So if you’re gunning to ditch the shades and hoodie disguise but still want to retreat further from society, here’s your chance, gentlemen.

Just remember that in a world where technology plays genie in the bottle to our every whim, think twice before you digitally disappear. If it’s invisibility you seek, be careful what you wish for.