The world is (supposedly) ending in two weeks. Jessica Simpson is pregnant. And the Redskins are somehow relevant again. I’d say this is reason enough to drink, wouldn’t you? But before you belly up to the bar, boys, take a moment to consider what your drink choice says about you – to the ladies, at least.

Most of the time, what’s in your glass isn’t reason enough for us to take pause. But every so often, what you’re drinking gives us insight into you. Or at least what we assume about you. Right or wrong, these are some of the messages your beverage sends out to the female population:

Beer (low end): This is, for the most part, what the majority of the male population below 25 years old imbibes. Miller Light, Bud Light, Coors, Keystone, Natty (do they even make that anymore?), you get the idea. They’re mainstream, they’re simple, and in some cases (Read: SOME cases, not all), they’re not even that good. I’ll catch hell for that one, I’m sure.

To borrow a friend’s quote, “It’s like people who eat Tostitos brand salsa. There’s more to life than that.” I’m far from a beer connoisseur, but even I recognize that there are better options out there. Unless you’re on a budget, in which case I can sympathize. Or unless you’re drinking pitchers or buckets on football Sundays. In which case go with the masses. Also, GO BIG BLUE.

I realize that to many guys, beer is beer. But after college, and after you’re making at least what I hope is a liveable wage, you might consider exploring your options. I’m not hating, we just appreciate when you’ve cultivated at least some sense of beer taste. It won’t ruin your chances with us, but it’s not helping you out either.

We automatically conjure images up of your apartment having mismatched chairs, the couch from your college days, and/or dart holes in the walls. (Just no Yaffa blocks, please). I’m not saying you have to abandon your beloved swill beer, I’m just suggesting that you raise the booze bar.

*Miss Wingman note: An exception has to be made for Pabst Blue Ribbon. It’s near and dear to my heart. So long as it’s not being drank in an ironic, hipster kind of way, the PBR man gets a thumbs up.

Scotch, whiskey, bourbon or anything ordered “neat” or “on the rocks”: If you know the difference between single malt and blended, have a brand of choice, or can describe what “smoky” vs. “peaty” is, I’m talking to you. Miss Wingman was recently at a swanky cigar bar where practically every man in the place was drinking something that falls into this category. They wore custom shirts, shiny loafers and monogrammed cufflinks. And they had women in sequined tops with mile-long legs by their side…no coincidence, I’m sure.

The man who drinks Johnnie Walker Blue or an aged Macallan comes across as self-assured, mature, and has at least some appreciation of the finer things in life. But fret not, fellas, it doesn’t have to be a cost prohibitive spirit. A glass of a lesser brand isn’t taboo in our eyes. This type of drink just tells us that you either A) care enough about your taste to discern what you like, or B) just want people to think that. Beware: the line between “polished” vs. “prick” is a fine one in our eyes, and your attitude is the determining factor.

Mixed drinks of the vodka/soda variety: Regulation city. They’re not bad, but they don’t necessarily have any teeth to them, either. Full disclosure: a Ketel/soda is usually my order too. Guilty as charged. But then again, I’m a chick. If vodka truly is your drink of choice, then bottoms up my friend. But if it’s just because you can’t think of anything better, I assure you – there are more exciting ways to get f**ked up.

Beer (higher end): Imports, micro brews, IPA’s, lagers, etc. (think Stella, not Schlitz): Now you’ve graduated to a level of drinking that at least has some thought put into it. Find the most unusual beer name on the menu and order that – it’s always a fun experiment. Plus, if it’s good, we might ask you for a sip. 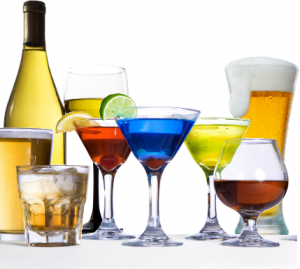 Wine/champagne: Red or white, bubbles or not, it doesn’t matter. Sometimes these are just a nice alternative to beer and liquor – especially if you know something about them. It’s a sexy man who is knowledgeable about different regions or reserves. Just make sure to order them in an environmentally appropriate setting. As in, don’t be the guy who orders a bottle of Moet in a sports bar (cough *D-bag* cough).

Jameson/Guinness: Hell, I’d marry you right then and there (but maybe I’m just biased towards both of these).

Craft beers: In all honesty, I had to Google what this even means. And I’m sure I’m not the only female who doesn’t fully grasp what it entails. It’s mostly lost on us, except those who do the whole home brew thing. Now that’s a hobby I can get behind.

Jaeger, Four Loko or anything in a red solo cup: You’re probably not even old enough to be reading this site.

Fruity cocktails or frozen drinks of the umbrella-bearing variety: I mean, do I really have to spell it out for you? Yikes. Unless you’re on vacation, in which case – pink, blue and cherry-topped all the way.

Tequila: A damn fine beverage, though probably not one we’d like to see you drink exclusively or often. Tequila is fun. Too much fun. Though it can be drank in a quality way, most of us – myself included – know no moderation here. Partake at your own risk, but if you must, leave the training wheels to us (lime and salt is for the ladies).

Absinthe, Moonshine or anything that was ever outlawed: Unless the girl you’re talking to just climbed up onto the bar and is pouring shots into people’s mouths, most of us aren’t adventurous enough to hang. Best to seek out women in spring break bars. Or in Ibiza.

Sambuca, Frangelico, etc: Wait, how old are you? These tell us that either you’re A) geriatric or B) mafia-affiliated.

Calm down, I can say that, I’m Italian.

Cocktails of the Manhattan, Martini, or Tom Collins variety: We like men who hearken back to a classier time. (“Mad Men,” anyone?) A solid choice, just beware – you also might remind us of our dads.

Hope this list helps, boys. Drink smart, drink often, and drink responsibly. The man who buys our beverage or gives a solid toast gets style points, too. So raise your glasses, gentlemen, but remember: Keep your love lives off the rocks, but your drinks on them.