Happy Monday, Wingman faithful. And since I’m a Georgetown fan, I use the word “happy” loosely.

I don’t care how many people are writing about the next big Cinderella story today, I still say “Suck it, FGCU.”

If you’re like me, you spent the weekend watching the tourney elevate men to kings, and then dash those empires to the ground almost as quickly as they rose. It’s been an emotional few days and frankly, I’m exhausted. But it got me to thinking…

Are guys usually graceful losers? Is there really a way to take the art of rejection like a man?

Eh, it depends on who the unlucky party is, but I suspect that some of you need a lesson on losing with class. From striking out with the ladies, to losing your job, to sports upsets of all kinds, failure can be a fickle beast. But that doesn’t mean you shouldn’t maintain your dignity (and your composure). So pull up a chair, boys, because class is now in session. And this time, the only grade on your report card that matters is an F.

I give you How To Lose Like A Man:

*Assess the situation. How bad is it? On a scale of 1 to 10, with 1 being getting brushed off by that blonde at the bar, and 10 being a game 7 upset in the 2004 World Series (from the perspective of a Yankees fan, obviously), where does it fall? If it’s above a 6, the requisite pouting-slash-bitter grumbling is allowed, sulk away my friend. Only for a little while, though. But if it’s just a minor ego bruise, put it in perspective and walk it off, man.

I understand that in matters of financial ruin, impending legal action or jilted love – being left at the altar must suck, I’ll give you that – the stakes are a bit higher. But try to remember that there will always be an upswing. Turn to your friends, faith, vodka, whatever. Just do what you have to in order to white-knuckle through it, and I promise you’ll make it out alive.

*Know when to take “No” for an answer. If we’re talking about your garden variety date proposition or failure to get a woman’s digits, sometimes persistence is key. I’ve known couples who started out as a relentless guy and a girl who eventually gave him a chance once he wore her down. And yes, those happy endings are possible, so long as you stay on the right side of the law. 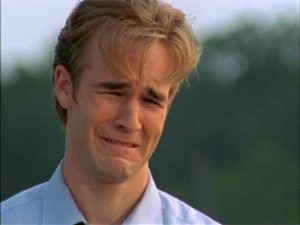 But there are also times when you should bow out gracefully. Did you get passed over for a promotion? Ouch. But throwing a hissy fit will only ensure that you lose the job you do have. Has she moved on to someone else and told you that she’s finally happy? Brutal, but give her the courtesy of closure.

There’s a fine line between fighting for what you want, and disregarding someone else’s wishes (Steubenville, anyone?) And no, silence should never be confused with compliance. D*cks.

*Be a class act. As much as it might kill you, being the bigger man is always key. Even if you were a stand up guy for 99% of the time, if you punk out in the home stretch, whatever legacy you created for yourself will likely be ruined. And who wants to taint their own reputation? Resorting to cheap shots, cutting remarks or tantrums of any kind is never the answer.

Plus, recognize that your setback could be someone else’s moment for glory. And even if it is, that doesn’t mean you won’t get your turn one day, too. Would it suck to be John Stockton to Jordan’s game 6? Absolutely. (Or Eisley, for that matter, and suck is an understatement). But should you begrudge somebody their moment in the sun? No. Because A) It’ll make your own accomplishment that much sweeter and more appreciated one day and B) You know what they say about karma.

*Crying Is not an option. I’ve made my beliefs on the Man Cry clear before, but just in case you need a reminder… Allow me to extol the virtues of just sucking it up once more. Sure, the relationship between chicks and your waterworks is a tricky one, boys, but in regards to sports? No such ambiguity. I leave you with the sore loser gospel according to Tom Hanks, even though I’m making a one-time exception and repeating a clip I’ve previously posted. Why? Because it’s a classic. And also, because the man has a point.