The single most asked about topic Miss Wingman fields on a daily basis is how to approach a woman at a bar. It’s the million dollar question for dudes of all ages. That’s why when a stone cold stranger won me over with his own charming approach this past weekend, I knew I had to share this fail-safe tactic. It’s just that good.

Now, let the record show that said dude’s “method” (if you can call it that, but it sounds too calculated), was neither flawless, nor did it result in any actual after-hours encounter. But it damn near could’ve for a lot of women, and here’s precisely why…

The scene: At a bar watching playoff baseball and college football in the West Village (shocking, I know.)

The players: Miss Wingman, two friends (one female, one male), two randoms, the hero of our story who we’ll refer to as “Tall Dave,” and one of Tall Dave’s buddies from an adjacent table full of bros who we’ll refer to simply as “Wing-friend.”

At first I was able to avoid engaging in the conversation, but soon enough I was being forced to make idle chatter as I scanned the bar, waiting for her husband to swoop in and save us. It was at that moment that I made eye contact with a guy at a neighboring table who, watching the social hostage-taking situation unfold, shot me an unmistakeable “Ooof, that’s brutal” look, while smiling in amusement.

I couldn’t help but start laughing (to myself, like a lunatic because I’m the only one who saw his reaction), and I struggled to keep a straight face as Random 1 and Random 2 continued to drone on and I stared down helplessly into my rocks glass.  I glanced back over at my new compatriot and saw that now he was laughing, too, as he made a “cut that shit off” gesture with his hand. By now I was outright laughing, and a few moments later, Tall Dave walked towards me as his friends finished paying their bill and began to leave the bar.

Desperate for an escape, I looked right at him and said loudly, “Hey! Oh my god how are you? It’s so good to see you!” (*Editor’s note: I know, it was shady of me, but whatever. Tall Dave barely skipped a beat and began to play along like a boss.)

So I continued, “(Friend’s name redacted), come here, I want you to meet someone! This is my friend…” and then I waited until he introduced himself, because pshhtt! The hell if I know. I had no idea what the f**k this guy’s name was, only that he was coming to my rescue (and Amen to that, brotha.) But apparently, his name was Tall Dave.

OK fine, I added the tall part. But seriously, he was really, really, tall. 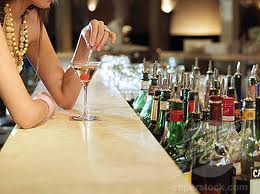 Soon after our feigned impromptu run in, the Random Twins got the hint and exited stage left, and Tall Dave and I clued my friend into the fact that we’d never met before in our lives. She was as amused by this as I was that he’d intervened at all. Then he introduced us to his buddy, Wing-friend (also married), and we all made small talk for a little while.

Eventually, Tall Dave admitted that he was on his way out the door to a nearby bar for a friend’s birthday, which is where the rest of his crew had already disappeared to, and asked if we’d like to join them across the street. We told them we’d love to, but were going to grab some food, then we might make our way over after dinner. I thanked him again for his chivalry, and we all parted ways.

Before you cry foul, arguing that the evening not ending in a pile of discarded clothing on the floor means that it wasn’t a successful pickup, let me assure you – it was a near-perfect execution. He managed to come across as charming, funny, and socially adaptable all in the span of about 10 minutes. And he made me laugh, which is the single most important thing you can do to get a girl’s attention.

He even employed the right Wing-friend in the equation by choosing someone that wouldn’t present himself as competition, since homeboy was wearing a wedding ring himself. Where Tall Dave went wrong, however, was only thing: he should’ve asked to get a phone number before they left the bar.

Because you never know where the night might take you, and sometimes people down a few more shots and end up in a food coma-induced stupor and are too tired to keep the party going. And sometimes friends dip out early, and no girl – at least no girl who’s not borderline desperate – is going to roll into a bar full of strangers all by her lonesome to find some guy she just met for a hot minute. Even if he was pretty cute, in a disarming way.

It should be said, however, that the key to this whole interaction was that it didn’t come off as “game.” Tall Dave neither seemed like a player, nor did this seem like the type of schtick he usually pulls with women. That doesn’t mean this wasn’t his go-to move, I suppose it’s possible that it could be, it just means that it didn’t feel like it at all. It came across as a genuine human reaction, and authenticity’s hard to find in a bar.

So the moral of the story, gentleman, is that the ability to throw a lifeline to a woman in a situation we’ve all encountered (and sometimes dreaded) provides the perfect lane to make your entrance. It sends the message that you’re down to earth, witty, and – most importantly – harmless.

May you all learn something from this feat. It takes a confident man to make the awkward choreography of the cold approach feel endearing. May you all find your inner Tall Dave. And to Tall Dave, wherever you are, I salute you.