Because nothing says, “let’s take our friendship to an uncomfortable level” like asking people about their penises, Shawnee Barton, a writer for The Atlantic has taken to polling the people in her life about their, um, junk. Or rather, their son’s junk, in an effort to figure out whether she should have her newborn son circumcised. And what did she find out?

Apparently, everyone’s creeped out by the flesh turtleneck.

To be fair, they’re actually more concerned about uncircumcised men’s ability to procure oral sex than creeped out, but their sympathy smacks a little of disdain. So what’s an uncircumcised guy to do? Is the Foreskin Fo’ Life title dooming dudes into a future of celibacy (or at least, of handy’s)?

Hell if I know, I don’t have a penis (despite what some angry Redditors claim.) But I have heard an anecdote or three about women who’ve had to befriend a foreskin unexpectedly, and here’s what I do know: women aren’t as cool with it as everyone would like to think.

Sorry fellas, but before you point that torch-wielding hate mob in my direction, hear me out. I’m not saying that the author’s sources were right, that women don’t want anything to do with the penis poncho. Many an uncircumcised man has successfully procured a mate and procreated, all without ostracism. I’m just saying that, upon our initial introduction to his…cloaked manhood, lots of women find it jarring. Or need a moment to adjust to the scenario. The first time, at least.

On the flip side, if you suddenly came upon a woman with a vajayjay piercing or giant labia, you might be startled too. And even though you weren’t passing judgment or being squeamish, you’d still need a second to navigate this new landscape, right? It’s the same thing.

We’re not branding unsnipped dudes mutants, we just don’t always know how handle that equipment. And as I’m sure you’ve lamented many times during tedious sexual encounters, it’s not like penises come with an instruction book (let alone uncircumcised ones.) Vaginas, however, should – some of you could use it.

That said, if the woman possesses basic levels of sensitivity (shrieking “ew!” is generally frowned upon), or if the uncircumcised dude helps walk her through the mechanics, the hookup should be fairly seamless and minimally awkward. Until later, when that first time hood-handler recounts the “holy sh*t I was NOT expecting that!” story to her roommates (as was the case with a few of my college friends, who know who they are.) 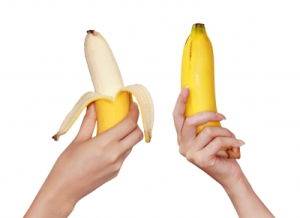 But being prepped beforehand, educated on the mechanics and being able to Google images of it doesn’t mean women won’t still be thrown. It’s not Europe, where 80% of dudes fall into the frenulum-friendly category and women are seasoned pros at the pull-back. In Europe, it’s also not customary to give your fiancee an engagement ring, but good luck convincing American women that’s a good idea, too. Some things just take getting used to.

But here’s where this story takes an even stranger twist: I was less thrown by the overly optimistic reader comments on uncircumcised peen acceptance in the article than by the amount of people who made the association between their infant sons and blow jobs to begin with. What. The. F**k, people.

Picturing (or prepping for, whatever) the day when your child will be in a sexual situation and how to help them along – or at least, how to not literally C-block them – may sound like forethought to some, but to the rest of us it seems inappropriate.

Baby parts are baby parts, man parts are man parts, and connecting the dots between the two, for anyone who’s spent a lot of time around children, is bizarre. Even in the spirit of trying to protect them from rejection. I don’t even want to think about my nephews having a childhood crush someday, let alone their junk in any situation that doesn’t involve diaper changing. But I digress…

If the author’s friends and family are to be believed, men whose parents shun the high & tight birthright will be relegated to a lifetime of women (who normally hand out blow jobs like candy, presumably) not wanting to go down on them. But if the rest of the male population is to be believed, nbd, bro! It’s not because of your accessorized appendage that women are freezing you out, it’s because us frigid women just hate giving oral sex period. “It’s hard enough for a guy to get a blow job as it is,” was one man’s pro-snipping rationale. Sigh.

So take heart, gentlemen. You might have a “BJ unfriendly” wang, but it sucks to be us, too (or, you know, doesn’t…) Because in the end, you’ll never stop believing we hate giving head anyway.