In the months since Miss Wingman has taken to my keyboard to dispel the myths of the female mind, I’ve known that I would eventually open up the floor to those with something pertinent to say. That day came when, over lunch with an old friend, she mentioned that in her relationship with her girlfriend, if they eventually wanted to get married, she’d have to do the proposing. “Really?” I asked, confounded. “How did you determine that?!”

So, not being properly equipped to discuss this topic on my own – but still finding it absolutely fascinating – I sought out someone uniquely qualified to expound: a wonderful writer named Stephanie Berman. You men can likely relate with much of what she’s saying, however it’s something that those of us in the hetero world would never have thought about otherwise. But it still bears discussing.

Even though all it takes to get men’s attention is to yell “LESBIAN!” and then watch your mouths water, I urge you to read on for more profound reasons. If you men thought you had the hard part, you might reconsider your viewpoint after this. So, the floor is Stephanie’s. I hope you all enjoy her honesty as much as I did.

In relationships, no matter if they are brand new or going the long haul, there’s always the constant elephant in the room: the expectation of marriage. Most girls – not all, but most – want to get married. We dream about the perfect dress, the perfect day, the perfect song. Let’s be real, we dream about perfection. That includes the perfect proposal. Fellas, it’s safe to say you have your work cut out for you. But what if there are two women getting married? Then what? 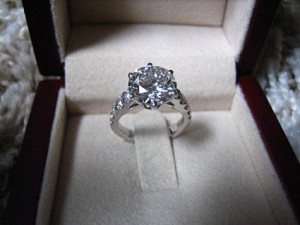 The topic of marriage is one that’s highly debated when it comes to same sex relationships. We know that there (sadly) are still those out there that don’t condone same sex marriage. For now, let’s assume we live in a perfect world where the laws of marriage are the same for everyone.

But eliminating the roadblock of two women even being able to get married still doesn’t eliminate the question of who gets down on one knee? Do they even have to get down on one knee?  Do they just high five and agree to get married? Is the “butch” lesbian supposed to ask because she’s more of the “man” in the relationship? What if there are two “lipstick” lesbians? Apologies for the stereotypes, but who would’ve even thought there would be so many complexities in a marriage between women? We would, that’s who.

I’m a lesbian, and I’ve been in all kinds of relationships. Straight ones, quick ones, bad ones, long(ish) ones, and I recently became a married woman. But it wasn’t a smooth road to get there. When I started dating my now wife, we’d both just recently come out of relationships, so marriage was definitely not on our minds. We didn’t fall under the typical “U-HAUL” lesbian definition, meaning we didn’t profess our love for each other, get a dog and move in together within two weeks of meeting one another. (*Miss Wingman note: Ha! You learn something new every day).

That said, after about a year together, we started talking about marriage. Before that talk, I had a similar mindset to the average woman. I was thinking about someone getting down on one knee and giving me a ring.  Here’s the catch though: my wife had the same thoughts.

I’ll never forget when she said, “I love you, but if you want to get married, you are proposing to me.” Boom – there it was. The question of who would ask who was decided for me, she was adamant. I’m not quite sure of her reason why, but she got her wish. I will say, there was no less pressure on me just because I was a girl proposing to another girl. So I guess we have something in common, guys.

I decided to take her on a trip to Mexico and I planned a private dinner on the beach where I would give her a book of pictures and moments we shared, and on the last page it would say, “Will you marry me?” Then I would present her with a ring. Sounds easy, right?

Not so much. Not only had I been nervous about taking this expensive ring to Mexico and traveling with it all week, I also had to keep it with me at all times because I didn’t want to risk leaving it anywhere. I even purchased a “change purse” that had a secret pocket to hide the ring, but try stowing that away in your board shorts while trying to swim at the beach and not looking like a weirdo attached to a change purse.  No easy task.

I was a nervous wreck. The night before the big dinner, I consulted with the hotels “romance concierge” (yes, they actually have a such a thing). I asked them to fill the room with rose petals and get it all ready for when we would get back from our engagement dinner. Everything was set…and then I heard the roar of thunder. The sky opened up to a full-on downpour. When the concierge called to cancel our dinner, I started freaking out. Legit, freaking out and she had NO idea why, nor could I tell her.

Fast forward to the longest 24 hours of my life until our dinner was rescheduled (on our last night there, no less – no room for error). I was so nervous, even though I’d been “practicing” for months. Thankfully the night went as planned, and now that the vacation was almost over, I could finally start enjoying myself.

But not before the concierge forgot to cancel the rose petals from the night before. Try explaining that one. Needless to say, things are no easier for us women, and my advice? Don’t involve anything dependent upon the weather in your proposal.

Women being the ones to do the proposing (even to men) does happen, just not very often. But why not?  If the girl wants to get married and has the whole “perfect” plan in her mind, shouldn’t she be the one to see it through? When did the rules become that a man had to ask?  I don’t know, but I do know that for whatever reason, men are still expected to do the proposing. (*Miss Wingman note: Um, unless you live in Ireland and it’s a leap year. True story).

In the straight world, this is something you would never think about, but alas, something all lesbians have to discuss. Like deciding if she’ll ask the other girl’s father for permission to marry his daughter (awkward!), or if she’ll have to get down on one knee. What rules apply for two girls? Fortunately for me, there were no rules, but we still had to discuss all of this prior to the proposal.

FYI, I didn’t end up asking her dad for his blessing, nor did I get down on one knee.  But, I did ultimately decide that me asking her was more important than someone asking me and not being married, or not being with her at all.

So, guys, rest easy. You aren’t alone in walking the marriage plank.  It looks like some of us girls have our work cut out for us as well when trying to live up to the expectations of a significant other.

Leave it to women to further complicate the idea marriage.