There are some places you just shouldn’t have sex. Like, for instance, on railroad tracks. When a train is coming. And you’re drunk.

In the latest (yes, latest. Sigh…) impossibly stupid and unfortunate case of bumping uglies turned ugly, a couple in the Ukraine just found out the hard way that man’s primal urges are no match for the raw power of a man-made switcher locomotive. This lesson came when it bore down on the pair, who were having sex on the active tracks, killing her and costing him his legs.

Now, I know it’s no laughing matter, but if you’re like me, you’re probably thinking, “What the eff? They couldn’t find a safer place to get it on? Like, say… in the middle of a drone strike, up against a high-rise window, or atop one of those rickety footbridges from ‘Indiana Jones and the Temple of Doom’?”  Ummmmm, apparently not.

Officials said the “30-something woman” and her 41-year-old male companion were walking home from a friend’s party and, presumably, feeling frisky when they decided they wanted to “experience an extreme sensation near the railroad tracks.”

I mean… There’s so much irony in that statement that I won’t even touch it. It’s too easy. 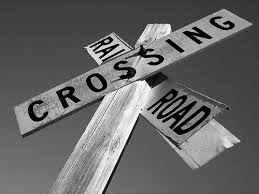 What I will do is offer up arguably the most obvious advice I’ve doled out on this site thus far by imploring all of you to STOP HAVING SEX IN STUPID PLACES. Scratch that – in dangerous places. There isn’t a single sexual pleasure that outweighs the suck factor of having your legs sliced off. Or, like, hurtling to your death. Just cut that shit out already.

Wingman faithful, I’m confident that you possess more self control than a rabbit. Or a high schooler. Or, that you can at least shelve the passion until you get to a place where you and your companion won’t end up as a pun-filled Twitter headline. So please, raise the bar. I know you can do it.

The only upside to this story is that the sex must’ve been so earth-shatteringly good that the couple didn’t even feel a goddamn train bearing down on them (hats off to you, bro.) If you absolutely must check out, I guess there’re worse ways to go.