Maybe it’s because I’ve been traveling a bit lately (and still not done), or maybe I just feel the need to unload some tracks on all of you. Either way, the dramatic swing between time spent behaving badly and the quiet lull of airport downtime has caused an interesting playlist to emerge. So, in honor of the long weekend, here’s a list of solid songs I’ve had in heavy rotation, for your President’s Day enjoyment. If you listen closely enough you can almost chart the course of my weekend’s antics.

And just to ensure you that this is Wingman relevant, you can play this on long drives with your girl sitting shotgun. She will most likely approve…at least I think so.

“Into The Fire” – Thirteen Senses

“If You Run” – Boxer Rebellion

“The OtherSide” – The Roots

“Tighten Up” – The Black Keys

“Under Cover of Darkness” – The Strokes

“For You and Your Denial (acoustic version)” – Yellowcard

And there you have it: my entirely schizophrenic playlist as of late. Do with it what you will, but it has served me well thus far. I hope it does the same for you.

After yesterday’s list of holiday gifts highlighted things that can’t fit in a box, it’s only natural that today’s list features things that only fit in an envelope. That’s right – put some tickets in her stocking this year. Whether for live music or sporting events, you can’t go wrong taking her to see something she loves in person.

While I lean heavily towards the “there’s nothing like a concert” direction – or maybe I’m just still disgusted by the NBA post-lockout – here are some of the more coveted (Big Apple) shows she might want to add to her stub collection (sorry other cities!):

And if she can wait a little longer, some 2012 dates that could make for great gift options are: 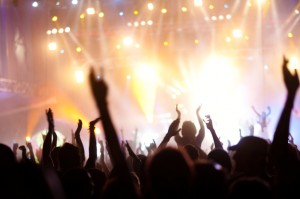 Of course, there are other 2012 tours in the works, like Coldplay and Red Hot Chili Peppers, not to mention several more rumored shows (please please pretty please Beastie Boys), just in case this list doesn’t suit her concert palette.

And, since Santa wanted you to have other ticket options, if you can’t catch the end of the NFL season, you could always take her to an NBA game (insert eye roll – I’m sticking to college hoops this year) or hit up my favorite sport to watch live – hockey. New York Rangers fans don’t have to wait long to gift her, they play the Islanders on 12/26 – always a fun rivalry.

If you don’t live in the greater NYC area, you can always check what’s playing in your neck of the woods on sites like Citysearch, or just stalk the tour dates list on her favorite band’s website (or sign up for alerts, too).

So, whether you want her to rock – or be a jock – this holiday season, you can’t go wrong with the gift of paper…tickets. Ho Ho Hope she likes them! (OK, cheesy puns over, won’t happen again). And, make sure you keep it right here for much more of Miss Wingman’s 12 Days of Fail Safe Girl Gifts.