The last time we met, I took you through the finer points of the male-repellent Fox hit “Glee.” This time around, gentlemen, I promise that your girlfriend/wife-inflicted television torture won’t involve any singing or dancing…at least not intentionally, we hope. 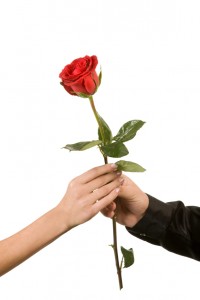 Since this round of pop culture Cliffs Notes has to do with latest installment of “The Bachelor” (therefore no real plot, per say), I’ll instead provide you with five handy phrases to make her think you were paying attention. Then you’re free to send out “SOS” texts to your buddies on the sly.

Hear that? That’s the sound of your single friends NOT envying your life. Sorry, I had to, it was too easy…

For what it’s worth, being forced to watch whining, weeping girls (albeit hot ones) last night when you should’ve been watching the LSU/’Bama game is grounds for a break up, in this girl’s opinion. But, if you were watching Ben and his harem instead, you were probably thinking more WTF than BCS, and sorry to hear it, boys.

Key phrase 1: No matter what girl she’s talking about being a head case, regardless of the episode, just say, “That’s nothing! No one could ever be as crazy as that Jenna blogger girl. I’m so glad he got rid of her.” *Miss Wingman note – thanks for making us all look bad, Jenna, you just made me want to give up writing and my other X chromosome. Nice work!

Key phrase 2: If she asks what girl you think Ben will end up with, you say, “The really hot one (who’s name is Courtney, btw). He’ll ignore how mean-spirited she is because she’s a model. Guys are helpless to such power,” and then quickly assure her that she’s much prettier than Courtney. And a much better person. Chances are you’ll be 50% right.

Key phrase 3: If she says anything about Ben’s hair, just say, “It’s a good thing he has that going for him. And the wine thing, too, because he’s turning out to be one of the worst Bachelors they’ve ever had.” Sorry, Ben, sad but true. I used to be a fan…

Key phrase 4: If she says anything about the two girls who pretty much swapped teams on the first episode, nearly falling in love with each other instead of the Bachelor, just say, “Whatever, I support it. I’d rather see them in a relationship together than with Ben, he’s too boring.”

And finally, Key phrase 5: No matter what girl she’s talking about, whether it’s during a rose ceremony, group date, etc. if she asks you anything – any question at all – just say, “I’m sorry what? I didn’t hear you, I was too distracted by Blakeley’s boobs.” I know you’re thinking that will make your woman mad (or make you look like a pig) but trust me, it won’t. I’m not even into breasts and even I can’t look away, it’s borderline uncomfortable.

The only other things you should know about this season are that the girl who rode in on the horse the first night and the model hate each other, everyone hates the girl who brought her grandma onto the show, and Chris Harrison and Ben keep dressing alike. That’s it, in a nutshell. But if I were you I’d make a point of being conspicuously absent on Monday nights (read: watching football/basketball/hockey somewhere far away) to preserve what little testosterone you have left. And for that, you have ABC to thank.

Have a show you’d like me to decode? I take requests! Misswingman@gmail.com, get involved.