Face it – your NCAA bracket is not going to win. Probably. No, not probably. Likely. In fact, even if you made every single one of your selections based on choosing the better-seeded team, the likelihood of that bracket being perfect is still 35 billion to one odds.That’s billion with a “B.”

In other words, you’re about seven times more likely to be killed by falling debris from space than you are of beating those bracket odds. Feel better now that the pressure’s off?

Good. But even though March Madness is Miss Wingman’s favorite time of the year, better even than my birthday, the beginning of summer or the days leading up to Christmas, that doesn’t mean I fill out a bracket with any reasonable expectation of winning. But damn if watching teams vie for glory in the tourney doesn’t make losing a hell of a lot of fun.

That said, there is an obvious link between the process of filling out your bracket and how you should approach dating. Yes, the bracketology-to-broads parallel is a strong one, and one that can be used for your educational purposes, gentlemen. And if there’s one thing Miss Wingman prides herself upon (other than being an unabashed smartass), it’s schooling dudes on how to navigate through our crazy and land the woman of your dreams.

So, even though I thought it wasn’t possible to beat last year’s “Selection Wingman” posting, I will try to elevate my game. I give you The Top 5 Ways Bracketology is Like Dating. Ready, set, go…

#5 Do Your Homework: From figuring out what Florida’s 3 pt shooting percentage is, to nailing down who Louisville has beaten out of conference, to analyzing the kind of defense Minnesota runs, it’s all about the research, boys. Stats and figures are your best friend. Just as, if you meet a girl you might be interested in, you should e-stalk the bejesus out of her like you’re recruiting a player. Hey, in fairness, we Google you, too.

There’s a reason Facebook is so useful, and it doesn’t involve being subjected to your high school friends’ baby’s photo shoot, engagement announcements or viral videos of the Harlem Shake. Incidentally, if you post any of that shizz, I’ve definitely blocked you from my news feed.

Do a little digging, find out what she’s into, and try to handicap the likelihood of your compatibility. And if it doesn’t look good, you can always scope out her friends.

#4 Use Common Sense/Instincts: If it seems like a long shot that a 16 seed will win, it is (and incidentally, it’s never happened). If she seems too high maintenance or over-dramatic for your liking, listen to your gut and cut your losses.

I know it’s better to check your emotions at the door when fill out your bracket, like ignoring your love for your Alma mater in favor of their actual hoop skills, but try to get a clear picture of their prowess free of bias. It’ll eliminate misleading distractions. Unless, of course, you’re me and your team just dominates (Hoya Saxa, b*tches). 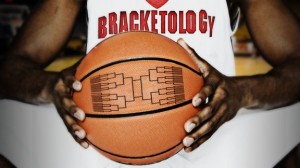 But seriously, listen to the logical voice inside of your head. If you have a history of dating girls with dependency issues, or if she’s never been able to sustain a relationship long term, this is telling you something. Past performance is a powerful predictor of the future, so don’t forget to factor that in. Um, that said, ignore what I just said as an air-tight rule and…

#3 Don’t Ignore The Dark Horse: Sure, the numbers usually don’t lie. I’d love to imagine that UAlbany will take down Duke, because the only thing stronger than my hometown pride is my full-on hatred of the the Blue Devils. But it’ll never happen.

Back to my point, though – there are exceptions. Every year there’s always that long shot that achieves an upset none of us saw coming (Butler, anyone?). Those Cinderella stories that make us love the Madness, rip up our brackets, and ask, “Where the hell is Liberty University, anyway?”

You should approach the unlikely dating candidate the same way. Does she seem a little nerdy or serious for you? Maybe she’ll end up being fascinating. Physically not your type? She might make you laugh so hard she wins your heart. All I’m saying is, she may not be the prettiest girl at the dance, but entertain the possibility that she could be the Lehigh to your 2012 Duke team. Just as long as you stay open-minded.

Sorry, another Duke cheap shot. Like I said, aversion.

#2 The “WTF?!” Factor: Some things in life (and basketball) are unexplainable. Why does the clueless girl who picks teams based on cutest uniforms or favorite mascots win the office pool every year? Why do your douchiest friends always seem to land amazing girls and yet you’re single? You know what I’m talking about here, guys.

I wish I could explain it, but I’m a writer, not an effing magician. Just accept that there are going to be outliers, and that you should ignore what everyone else is doing and just focus on yourself. Process of elimination can be a crazy thing.

#1 Enjoy The Dance: In college hoops and in life, truer words have never been spoken (Thanks, MB). If the name of the bracket-slash-romance game is surviving and advancing to the next level, the only way to do that is to roll with the punches and leave it all out on the court.

Because in the end, dating is a lot like the tourney – everyone’s full of advice, but ultimately you just have to go with it. Things just have a way of coming together, so try not to forget that it should be fun. A lot, a lot, of fun. Good luck, gentlemen, keep your eyes on the prize, and as I’ve said before but it bears repeating – remember, it’s anybody’s game.