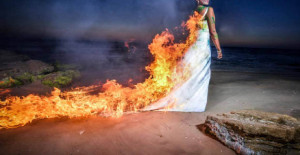 Ever walked up to a starving person with a Shake Shack burger (or whatever the equivalent is in your flyover state) and NomNomNom’d right in front of them, while commenting on how good it was and how full you were getting? Or flashed a wad of bills at people collecting for charity only to use it to fan yourself in this heat and then put it away? I hope not, because that would make you an a$$hole.

The same kind of a$$hole who would spend thousands – or less, David’s Bridal’s aight, too – on a dress, only to immediately destroy it after you wore it. Who would do such a thing, right? Apparently, these people.

I know news outlets, The Knot and opportunistic photographers are trying to convince us that “Wedding Dress Trashing” is a thing right now, but let me clear something up: F–k these people. These people are morons. You know what else is a thing? Midget tossing, but you don’t see me grabbing the first little person I see on the sidewalk and punting them, because some s**t, while technically possible, just doesn’t need to be done.

Like setting your wedding dress on fire, or jumping into a body of water with a strong current wearing 20 lbs of satin and tulle (and then drowning, sadly), all so that it would make for an awesome Facebook album or get your Instagram featured on The Wedding Channel.

What the f–k, people? Are you stupid? Has it completely escaped you that there might be better things to do with that dress? Obviously. So here’re a few suggestions, just in case your creativity checked out along with your judgment.

Donate it. Do you know how many organizations accept used dresses for less fortunate or budget-conscious brides? Well I don’t, because I haven’t bothered to count, but I’m sure there are about a zillion. Services like Goodwill or the Salvation Army are in practically every city. If you’re feeling generous AND socially aware, you can even find a place where the proceeds go to cancer research, like the Memorial Sloan-Kettering Thrift Shop. It’s called Google, people. Use it.

Pass it down. Got kids? Plan on having any? Maybe you’ll have a daughter one day who really appreciates the sentiment behind wearing your repurposed dress. Or a son. Because hey – it’s 2013, and that works, too.

Get crafty. Martha Stewart has made an empire out of doing things with scissors and a hot glue gun that no person without an overabundance of time should ever do. I mean, I’m probably not going to make keepsake throw pillows out of my hypothetical dress to my hypothetical husband one day, but whatever, maybe you will. Who doesn’t love throw pillows?

Or bust your dress out at the divorce party all of your friends know is eventually coming to help laugh about your failed marriage and lack of foresight. Bonus self-esteem points if it still fits! Or do housework in it. Mow the lawn in it. Hell, watch the Clippers game in it with a beer on your couch, I don’t care. Just don’t destroy it doing your best Steve-O impersonation. Or, squander the opportunity to help someone else. Because altruism’s sexy. But stupidity’s not a good look on anyone.