So much has been written about Valentine’s Day that even the journalistically inclined are hard pressed to find a new way to tackle the subject. Taking the straight route, for example, dictates that we make some romantic comparison to a timely subject – like, oh…I don’t know…politics, as found here. Gosh, what a well-crafted argument, whoever wrote that must be pretty clever (or just shamefully self-promoting – your call).

Or there’s the statistical route, which isn’t flowery but still pretty damn interesting, like this compilation of cupid-related numbers. Eleven thousand children conceived on Valentine’s Day on average?! Ew, that’s more information than I needed…

But my personal favorite read as of late was about Valenswine’s Day, the day before Valentine’s when men take their mistresses out for a romantic tryst (hey, it’s better than double booking, right?)

This year, however, my contribution to the lovers melting pot is a 2012-themed Do’s and Don’ts list for both singles and couples. True, it may have been done before, but that doesn’t mean it’s not still fun.

DO try to avoid flaunting your syrupy sweet relationship details on Facebook or Twitter. Uploading excessive pictures of your gigantic floral arrangement or giving us the play by play of all of the things “the very best boyfriend/husband/fiancee in the whole world” did for you today tends to get on people’s nerves. Also, please try not to profess your love in 140 characters or less. The words “marry me” should never come with a hashtag in front of them, in my opinion.

Men: DON’T pawn off a gift that really serves your purposes as something you think we’d enjoy. I’ve said it before and I’ll say it again: giving lingerie and sports tickets is only altruistic if you’re dating Adriana Lima or Marv Albert. *Miss Wingman note - if you’re dating a woman who would love to hit up an NBA game on Valentine’s Day, marry her. She rocks.

DO recreate a fond memory with your beloved. If your first date was for Dim Sum in Chinatown and then a John Hughes revival at local theater, why not relive it? (And if it’s not possible, ordering in Chinese and Netflix’ing The Breakfast Club works, too).

DON’T be afraid to Do It Yourself for a gift. If you’re particularly good at something (cooking, playing music, etc.) now is a good time to showcase your skills. Just don’t go that route if you’re known for being notoriously cheap – homemade is endearing, but not if your reputation precedes you.

DON’T ignore the holiday entirely, even if your significant other swears that she hates Valentine’s and couldn’t care less about it. Fact: 53% of women say that they’d break up with someone if they didn’t receive a present on Valentine’s Day. So even if it’s just a card, give Cupid a nod. Or else.

DON’T get drunk and text or call your ex. Likewise, don’t check their Facebook page or e-stalk them – it will not make you feel better – especially if they’ve moved onto someone else. The past is the past for a reason, leave it that way. 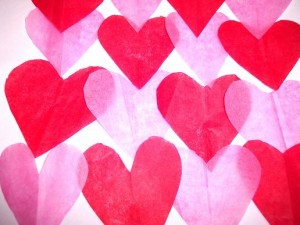 DON’T try to DTR (Define The Relationship) with someone with whom you’ve been casually hooking up. This is not to be confused with being DTF (Down To…you know), which everyone should be on Valentine’s Day. Right, Pauly D?

DO start fresh by eliminating painful reminders of your old flames on Facebook, G-chat or your mobile device (a clean slate is better than looking backward, after all), but DON’T do anything drastic, like overhauling your life. Joining every single dating website (and downloading dating apps), buying a whole new wardrobe and signing up for the next casting of The Bachelor is excessive, FYI.

DO turn the negative (read: a recent break up) into a positive. It turns out angst is great fuel for creativity, so find a way to channel it. Hey, it worked for Adele, didn’t it?

DON’T be a cliche. The idea of the embittered single female – or in rare cases, male – isn’t amusing, it’s just plain angry. Please avoid blasting “F*%k You” music or going to see a midnight showing of Carrie, it’s not helping your cause (or making the rest of us look good).

DON’T sext half naked (or worse) pictures of yourself to anyone, whether you’re in a relationship or not. Have we learned nothing from Anthony Weiner, people?

But DO spread the love. Remember how much fun Valentine’s Day was as a kid? You don’t have to write tiny cards to all of your coworkers, but dropping Hershey’s Kisses or conversation hearts on your neighbor’s desk is fun way to be nostalgic. Everybody loves a little kitsch once in a while, right?

And there you have it, Miss Wingman’s take on this hot button holiday. Sure, some may hate Valentine’s Day because it, following closely on the heels of the other dreaded singles holiday, New Year’s Eve, provides the one-two punch we can’t avoid. It’s like a tandem assault-by-calendar, if you choose to view it that way. But I’d prefer to think of it as just another opportunity to make someone else smile – and there’s nothing wrong with that. And, if you still can’t get behind it, just know that your own Valentine’s misery is probably nothing compared to this guy’s. My love to you all, today and always.