Congratulations, you got our digits – you must be doing something right. But, now that you’ve got the keys to the kingdom (or at least made it through the front gate), what you do next can determine whether we tell you to wipe your feet and come on in, or slam the door in your face.

I’m going to give it to you straight, guys, because I think a lot of you need to hear this. I truly believe that you can kill an otherwise good thing by playing your cellular cards wrong. So put your phones on silent for a minute and listen up please. Committing any of these digital Don’ts once shouldn’t be a deal breaker, but become a repeat offender and she just may cut off your service permanently.

Text us, “Hey” and only “hey.” Nothing else - What the hell is that? Seriously? That’s like calling someone and then, once they answer, not saying a word. Don’t forget, you reached out to us – not the other way around. So if you’re going to pop onto our radar, kindly fill it with something worthwhile, not just the sound of crickets. While we realize that texting at all means you’re thinking of us – or at least want credit for appearing to be – if you put forth minimal effort in your follow up, you’re ultimately just wasting our time.

Ridiculously lengthy, unexplained pauses between responses - I’m not talking minutes here, I’m talking hours. It’s cool if you’re busy – we are too – but if life sidetracked you while you were typing away, when you resurface it would be nice to offer an apology or an explanation. There’s nothing stranger than a guy who picks up the conversation after radio silence like there was never any interruption. *Note: my go-to move has become typing a playful “Ahem” to remind someone that their response should be forthcoming. Only do it with people you know well, however, lest you risk someone thinking you’re actually angry. 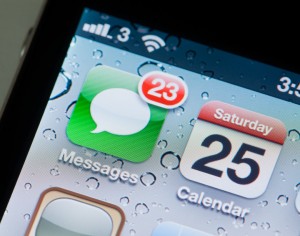 Send us shirtless (or worse) photos, flagrant innuendos or intentionally misspelled words - And by “words” I mean swapping some vowels out of the word c-o-m-e, and no I won’t elaborate further because I’m a lady (sometimes). Does she have a 9-7-6 number? No? Then keep it classy, boys. Long before Anthony Weiner made it a very public, very scandalous art form, men have been messing up a good thing by getting too fresh over text message.

The rule of thumb should be, unless you’ve existed on a somewhat naughty level with her in person before you send those messages, or if you get a crystal clear impression that she’ll be down for the get-down, don’t try to get away with any R-rated mobile content. Unless of course your relationship is well-established enough to withstand the backlash. PS, sending such content pretty much guarantees that your handiwork will be shared with her friends, so I hope you enjoy an audience (and being nicknamed “Brett Favre” from now on).

Over-use of emoticons, cyber-slang or abbreviations of the ‘Tween variety - Is your last name Bieber or Cyrus? No? Then she probably won’t LOL when you type such gibberish. BM&Y, sometimes IDK what U guys R thinking when U type msgs, but we don’t <3 men who act like 14-year-old girls. You probably won’t be scoring any more D8s if our phone is suddenly speckled with tongue-sticking-out smiley faces and we have to Google just to find out what your abbreviations mean.

If you want to emphasize that you’re joking – tone is sometimes hard to tell over text – then using a smile once or twice is fine, but keep it to a minimum please. Or you can get away with it if you’re Ashton Kutcher in this scene, but even his friends knew the rule, which leads us right into the late-night message…

Rely on text as your sole means of communication - There’s a time and place for everything, and while texting is convenient, it’s also a romantic cop out. It’s hardly a sufficient substitute for actual conversation. If we give you our number, we probably want you to use it. Preferably not only between the hours of 11pm and 3am, unless that particular girl seems content to be entered into your contacts list as “Booty Call.” Getting to know each other is important, but you can’t do that adequately if you’re always counting characters.

Utter disregard for punctuation - This one’s not a huge deal, but if your messages all run into one another with no consideration for periods commas or apostrophes how is someone supposed to read them on a small screen without going crazy right isn’t that just common sense I mean it should be (insert huge gasp for breath here sigh)

Try to be too quirky or cryptic - Answering our questions with another question is maddening. Trying to be overly clever is also frustrating. Still unclear? How about this – these are actual texts I’ve received: “I love alpacas,” “Down like a clown Charlie Brown” and “Let’s talk lades, babes, okays?” Um, yeah, you get the idea now.

If this list seems ridiculous, then I’m not sure why avoiding such pitfalls isn’t more obvious to men? A well-crafted text message takes talent, granted, but when executed it can do some serious wooing. I have had some insanely enthralling conversations with guys over text, where their sexiness quotient skyrocketed simply because they had a way with (electronic) words.

At the very least, it shouldn’t be too taxing to just keep your proverbial coloring inside the lines and try to remain charming between face-to-face interactions. And if all else fails, just pick up the phone. That’s right, hit that green “Send” button (the what?) and give us a few minutes of your time. Remember, we’ve got your number boys, and if you want us to keep it, you’d best behave.