OK listen up: Miss Wingman has been inundated with tales of guys going dutch on dates – or worse, those who don’t dip into their own pockets at all – and I’ve got to put a stop to the monetary madness. Repeat after me, fellas: “I will not allow a woman to pay on a date.” In fact, not only should you not let her reach into her wallet on a date, you should feel skittish taking her money in general.

Sound antiquated? The truth hurts. I always say that I can tolerate a lot of annoying little personality pitfalls with a man I’m dating, but the one thing that I could never accept is a man who has no manners when it comes to money. The buck stops at frugality, boys. Pun intended.

And if you think that I’m just too old school for my own good, don’t just take it from me. In the last few months I’ve heard more than my fair share of women complaining that men they went out with allowed them to split the check, or in some supremely shameful moments, let her pick up the whole tab. The Dutch are known for many lovely qualities, but bill-splitting isn’t the one you want to be associated with I fear. So some ground rules need to be outlined if you don’t want to mess up your chances at an otherwise good thing. Here goes:

Rule #1: If you invited her, you pay. No exceptions. Does it go the other way, too? Yes. Let it never be said that I’m not equal opportunity with my reprimands.

Rule #2: If it’s a first date and you so much as consider letting her even pay for a cab, you’re taking your own stock down several points – it’s bad form. You only get one chance for a first impression, and you don’t want yours to be that you’ve never heard the word “chivalry” before. All of the good manners in the world won’t counteract ignoring this rule. It’s just tacky.

Rule #3: If you’ve been out a few times and have paid thus far, then you can allow her to chip in here and there. Or at the very least pick up the slack in other ways (transportation, drinks afterward, etc). And no, I didn’t mean it in a sexual favors kind of way. Any woman with a decent set of values will at the very least make an attempt to even things out, and if she doesn’t, you should wonder why.

Rule #4: There are only 2 exceptions to these rules, if A) You’re not financially in the position to pay and are seriously hurting for funds – in which case invite her over to make dinner or watch a movie to avoid these awkward moments, or B) It has been established in some ironclad way that you’re just friends, and that your outing cannot be classified as a date. 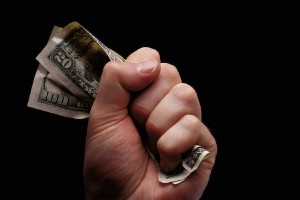 But even on that last point, I wince a little. Platonic sharing of a bar tab or restaurant bill is cool among friends, but I have some very gentlemanly male friends who still always insist on picking up my bill.

Whether it’s because they’re just financially in the position to take pity on their struggling writer friend (salary? what’s that? money? never heard of it), or just that they’ve been raised to treat a lady this way, it is a classy – and much appreciated gesture. Even if you’re out with a female friend whose bank account isn’t in the red, it’s still a polished, thoughtful move – though not a hard and fast rule.

Look, I come from a long line of crazy Italians who force not only food on people, but also will wrestle their own family members to the ground to pick up a tab. We bristle at others paying for us and have been known to put a terrified waitress or two in the middle of a very heated argument when settling up. Put it this way, if there was a Seal Team 6 for stealthily intercepting the bill and paying before your party realizes, we’d be the most decorated unit.

But even I, who’s strongly opposed to women who take advantage of men for their money, think that you should at the very least offer to pay. It’s the right thing to do.

And if you don’t like it, don’t shoot the messenger. Any way you slice it, dating is expensive – not to mention having a girlfriend, which is even costlier. But if she’s been raised right, too, she’ll be gracious and appreciative of your kindness. If she isn’t, then consider it the quickest way to cut your losses. In more ways than one.

But please just stop all of this nickel-and-diming nonsense. It wouldn’t hurt the men of today to take a cue from the courtship rules of yesterday and reach into their pants pocket more often. And if you don’t do it for our sake, do it for your own. If you treat her right, she just may let you reach into her, um…pants pocket, too.