I think the Nazareth song said it best, “Love Hurts.” (Actually, the Everly Brothers said it better first, whatever). But the question remains, in the aftermath of a breakup, what is it that really hurts most – the rejection or not knowing why we were rejected?

I theorize that the only thing that sucks more than adjusting to someone leaving your life is wondering if something you did will prevent others from making a similar departure down the line. How are we supposed to learn from our mistakes if no one tells us what we’re doing wrong? Especially if people never tell you the real reason that they bailed.

Not to your face, at least.

But why, because it’s too awkward and mean? Because we’d rather do the phase out than turn it into a (cringe-worthy and awkward) teachable opportunity? We’re not doing ourselves any favors by skirting the full explanation, we’re just punting the problem to the next person we date.

Life would be a lot easier if we could, upon leaving a relationship, give the other person constructive criticism about what they did that may or may not have horribly repelled us. It’s not that far-fetched if you think about it. We publicly review everything from physicians to restaurants for the benefit of others. Hell, we even give our teachers evaluations and let our employers dissect us on the job. It’s all in the name of improvement, and it’s a damn good practice.

So if the person who cleans your teeth is subject to open review, why not the person who will (hopefully) go on to become someone else’s partner in life? If what we want are answers, then the stakes are never higher than in matters of the heart.

Granted, it would have to take place after some time has lapsed, so as to allow the post – relationship dust to settle properly. Also, it should be accompanied by savage amounts of alcohol to soften the blow. No one wants to hear that their performance in bed or penchant for country music was the catalyst for failure, after all.

But even though we all have different things that qualify as deal breakers, some issues are universal. It’s these sticking points that would be best to troubleshoot before they keep you from a lifetime of playing Solitaire and eating TV dinners all alone.

Ideally, what would be best is if we could do it in some anonymous mailbox, like how people delivered us Valentine’s Day cards in elementary school. Or even how we conduct professor evaluations in college: gather a room full of your exes, fill out the form without signing your name, and have a volunteer slide the envelope under your door when it’s done. Quick, efficient and to the point.

It could even be as clear-cut and simple as a Scantron form, I suppose. Although you can’t exactly have a “Fill in the bubble of the correct answer” multiple-choice section unless the choices were something like this: “Why did this relationship end?” (A) Because your jealousy was suffocating me (B) Because your mother is insufferable and I couldn’t marry into that for life (C) Because you were emotionally immature or (D) Because you never wanted to do what I wanted to do and sucked at compromising. 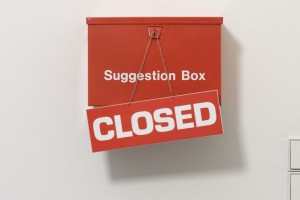 Actually, that could work, especially if the choices were more superficial, therefore easier to fix. What if it said, “What bugged you most about me? Circle all that apply: (A) You chewed your food so loudly it nauseated me (B) Your text messages looked like they were written by an illiterate 4th grader (C) Cheap isn’t hot, your frugality was a problem (D) Women like climaxing, probably work on that (E) I couldn’t spend another weekend with your awful friends or (F) All of the above.

Kidding. Having an “All of the above” would be cruel, obviously.

There would have to be some sort of essay section though, much like the SAT. It isn’t always cut and dry, sometimes we evolve into people who just don’t fit anymore. That requires some long-form thought, or at least an honest conversation.

The benefit of ever having this hypothetical knowledge would also help clear up any misconceptions about why you’re suddenly flying solo. For instance, if you thought she was bothered by your receding hairline (remember, just Bic it boys) but it was really that you were a bad kisser (tsk tsk, we’ve been over this) or had no ambition, this would be the type of intel that’s valuable to pass along.

Or it could just help you sort out the type of person you’re ultimately more compatible with in the long run. If you’re not glass half full, and your ex was practically Funshine Care Bear, the difference in outlook could’ve been grating over time. Better to find someone with an equally cynical sense of humor for your encore.

Whatever the reason, it speaks to our fear of confrontation that this type of exit interview would never actually take place in the real world. We’d much rather avoid telling someone the honest reason we fled than risk hurting their feelings. Ironic, since we’d readily offer the explanation to our friends if they asked. Funny how forthcoming we can be to others without feeling badly, but when it comes to the intended recipient we turn the lights off and pretend we’re not home…

In a perfect world, we’d all be self-aware enough to suss this out on our own. But that’s not where we live. Whether it was for the other person’s benefit or for our own learning curve, an exit interview should be mandatory – but I won’t hold my breath. It may be a mythical thing, but it would keep us from years of wondering what happened and afford us all a little more closure.

It’s too bad no sane person would ever actually implement such an experiment (not even me, and I have no filter). In the meantime, all we can hope for is that we learn from each relationship, apply the lessons for the future and be as honest as we possibly can about our reasons. And also, remember to bring a no. 2 pencil. You never know when you’re going to need it.