I’m not exactly sure how it is we’ve wound up back here again, but my Monday gift to you is another tale along the, “He did what?!” variety.

We’ve already found ourselves marveling in the stupidity of the wall street dude who made a spreadsheet to keep track of his conquests-slash-online dating prospects (that turned out well for him). Which is nothing, I suppose, compared to the woman who advises other women on how to land a finance guy of her own (hint: be unabashedly opportunistic and don’t mind if he doesn’t care about you at all).

Then there was the argument for the need for an exit interview, which I fully support – albeit highly socially unacceptable. But it looks like we can again bask in the ridiculousness of this new dude’s behavior, as he takes the idea of some farewell feedback to a whole other level.

Enter “24-year-old Finance Guy,” who requests that his dates fill out a survey after they’re done dating. Is it creepy? Yes, but not as bad as the article portrays it. Is it worthy of social ostracism? Eh, maybe, the jury’s still out on that one. But is it a good idea? Absolutely, I give the guy credit for trying. 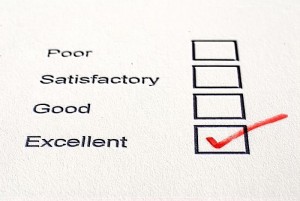 Suffice it to say that, if you’re going to try to implement the exit interview/survey strategy, it helps if you make it extremely funny, like this guy. Although I’m not sure he intended for it to be that way, to be honest. With phrases like, “Mike is very self-conscious about his hair, does he have reason to be?” and questions like, “Did Mike make a move?” that allows her to choose, “No, he was being a p*ssy” as an option, I almost applaud him for genuinely searching for opportunities for self-improvement.

Where he goes wrong? For starters, talking about himself in the third person. “Is Mike horrifying women by his weirdly megalomaniac tendencies?” Yes, yes he is. (And no, that question’s not really on there – but it should be).

I think the most amazing part, though, is that he asks the woman outright if she’s a feminist, “for informational purposes.” It’s as if he’s saying, “because if you self-identify this way, none of your answers are relevant because you’re a femme-Nazi.”

But my hands down favorite element is the last one, where Mike leaves room for women to draw him a picture if they’re so inclined. I wonder if any of the women have ever used that blank space to draw Mike a picture of some of the things that need improvement? Like his wonky hair. Or his less-than-toned butt (hey, he brought it up). Or his insufficient manhood (that one’s all me, but I’m sure I’m not the first one to suggest it).

I guess the moral of the story is that…there is no moral, honestly. It was just a highly amusing anecdote for your rainy day enjoyment. I don’t suggest for Mike to continue with this D-bag pop quiz, but I do think he deserves to be cut some slack. He’s 24. Do you remember what you were doing at 24? Yeah, we’re all miles away from those dating days I hope (or maybe not, some have come farther than others…)

So men, don’t give up the quest for answers and self-improvement. As I’ve said, figuring out why things went awry only serves to help you out in the future. We can all use some constructive criticism once in a while. But don’t do what he did, either. Unless you want to end up on a Gawker site, which is pretty much the only fate possible for you.

And women of Philadelphia, if you ever come across Mike, give him a high five from me. And make sure to draw him a picture.