Hate your relationship? Want to send your girl the message that you just. can’t. be. bothered? You’re in luck! There’s an app for that.

Thanks to some dudes in Australia, the dating app bar has just been lowered. Like, really lowered. Introducing BroApp, which promises to auto text your girlfriend for you, so that you can go out with the other Terribles and not have to worry about checking in with the ol’ ball and chain. And you thought dating couldn’t get any easier.

So how does it work? Bros enter their girlfriend’s contact info into the app, then they can either write a series of texts or choose from a default list of 12 messages (really personal, not-at-all-generic ones like, “Hi babe, how was your day?”), and then schedule them to be sent out on a specific day.

BroApp chooses the time that the texts are sent, and recognizes when you’ve recently messaged your girlfriend a non-completely bullshit composition of your own, in which case it waits to dispatch the next one.

And here I thought outsourcing your marriage proposal was the douchiest thing you could do.

Because the Brisbane-based developers have your back, the app not only recognizes your girlfriend’s Wi-Fi network so scheduled texts won’t be sent while you’re at her place, but it also prevents her from using the app herself. 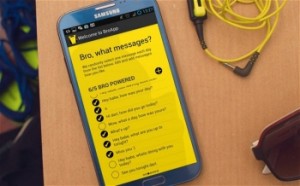 If she tries, it’ll bring up a “list of gifts you were planning to buy her,” they say. See how easy it is to foil us simple-minded women folk? The little lady’ll be none the wiser.

But they haven’t quite thought of everything, because they underestimate our ability to detect when you’re feeding us canned messages. (Sometimes, we’re smart.) Also, how does it handle responding to questions we’ve asked while you’ve gone off on autopilot?

Incidentally, the app’s currently only available on Android at the moment, which is pretty much the Google+ of smart phones anyway.

Lucky for you, the price of deception is cheap – the app only costs $1.99. As for us? Dating a guy who has BroApp on his phone seems awful, but it could be worse. We could be dating one of the guys who developed it.