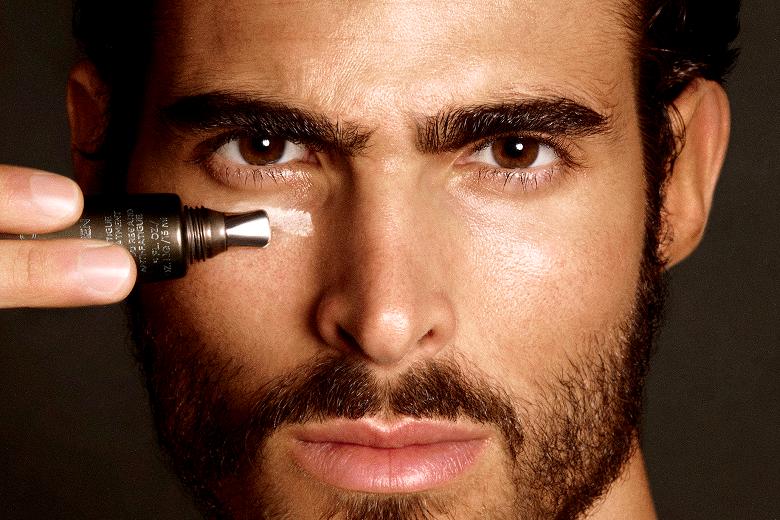 The last time a word made me practically choke while speaking it aloud, it was “brocelet,” (an incarnation of man jewelry, obviously.) But as much as Miss Wingman wants the dictionary of facepalm-inducing terms being added to the dude lexicon to stop growing, I bring you another chance to increase your vocabulary. Behold: “Brosmetics.”


If you’re picturing a guy in Dartmouth Lacrosse shorts wearing guyliner scratching his balls, don’t worry – I did, too. Luckily, it’s not that.

The rise of man makeup started as a quiet rumble several months ago, courtesy of Tom Ford’s new line of products for men. But apparently, it’s steadily crescendoed into…not quite a roar, but at least, like, a louder rumble. This is partially thanks to a recent GQ article by Miss Wingman’s favorite writer and fellow smartass, Drew Magary. If you haven’t read Magary’s stuff on Deadspin (or otherwise), you’re missing out.

So he posed the question, “Will Real Men Ever Wear Makeup?” while using products from companies like Mënaji (huh?), Jane Iredale (who?), and of course, Tom Ford. All while trying to protect his stash from his wife, because duh – if you’re going to own it, we’re going to steal it from your dopp kit, fellas. But even though he was able to draw his own conclusions from this little facial foray, I thought it only appropriate to offer Miss Wingman’s musings as well. Here are…

It’s all about trickery. Welcome to the advertising hellscape that women experience on a daily basis, gentlemen. How does it feel to have things marketed to you using a “Be less ugly,” platform? At least brosmetics companies know the importance of the It’s-Not-Girly-We-Swear presentation, so they use black, gunmetal or cigar box packaging. They might as well put a ribeye, a jock strap and a photo of Kate Upton’s boobs in there, too, just to hammer the testosterone home.

Nice try calling it “urban camouflage,” too. Bitch please. It’s man makeup. Just like the “jitney” is an uber-Hamptonsy way to avoid calling it what it really is, “the bus.”

It feels awesome. It’s OK, we get it. And so do the Koreans, apparently. Man makeup is huge in Asia (who knew?) Even Magary described brushing bronzer onto his face as “delightfully soft, like a tiny puppy is doing somersaults on my cheeks.” Totally, bruh. Not to mention how good it feels to go from looking like Voldemort to a fully-rested, evenly-complexioned person with killer cheekbones.

It won’t last. Face it (no pun intended), men don’t have to attention span or commitment required to adhere to a 15-minute beauty regimen every morning and night. Most of you can’t even be bothered to pick out matching socks. This is fine with us, since you’re largely ignorant of the towel-ruining properties of makeup anyway.

There’s a spectrum. There is a sliding scale of Acceptable Male Grooming vs. “Tha fuck’s on your face?” brosmetic product usage. Intrepid males should find reassurance in the fact that women would generally love for you to exfoliate your faces and clean up those pores. What we don’t want to see is you A) improperly applying concealer or bronzer so that you end up looking like an extra from “Lord Of The Flies.” Blend that shit, it’s not war paint. Or, B) being prettier than us. The ability to cover up blemishes is one of the only things we females get to enjoy over men SO JUST LET US HAVE THAT, OK?

Don’t be afraid to like it. Granted, I wouldn’t be thrilled if the guy I was dating suddenly wore more foundation than those chicks on “Shahs Of Sunset,” but that said – it’s not up to me (even though I will ridicule him for owning THIS.) Society needs to stop telling us what it’s OK to love, and what’s acceptable gender-specific behavior. I’m sick of people being baffled by my love of MMA, or throwing confused looks when I order scotch. So mud mask without shame, gentlemen – it’s 2014. Damn the man, save the Empire.