214. That’s how many guys have mutually swiped right over my photo on Tinder – two hundred effing fourteen. That’s more total dudes than on 4 NFL teams combined (well, the dressed players at least). And yet how many Tinder dates have I gone on? One.

Likewise, I’ve been active on Match for several weeks now, and how many guys email me to set up dates? None. Well, none that fit into my actual dating parameters, at least…unless I expand my search to include dudes over 45. So, in my frustration and utter confusion, I’ve decided to utilize my resources and ask the masses to weigh in.

Men of online dating. And male readership. And, like, people at large – I need to know. What am I doing wrong here? What gives?

Before you all start crying out that I must be ignoring perfectly good dudes on Match, let me assure you – I’m keeping an open mind. I mean, I’m not willing to compromise on certain things, like the men I date having kids (Miss Wingman’s not ready to be a Wingmom, thankyouverymuch.) But for the most part, I’m letting what guys say dictate my interest, and ignoring superficial things like a receding hairline or a hideous wardrobe.

In fact, I’ve stepped out of my comfort zone entirely and began doing what I’ve never done before in my 30+ years on this planet: making the first move. I’m sending emails to guys, I’m striking up the first chat conversations when I get a new match, and…nothing. Literally, crickets. I hate to sound arrogant here, but I didn’t expect this. I thought that since I don’t post duck face bathroom selfies, don’t look like I have Hepatitis C, and can actually spell, that I’d be able to drum up some interest. But no. I stand corrected.

And frankly, it’s starting to give me a complex.

I’ve emailed like 15 guys on Match to strike up a conversation, to no avail. Not a single reply in the bunch. Here’s an example of a message I’ve used to break the ice with a particularly snarky Brooklynite:

“Quite possibly the only person on this site who’s more of a smartass than I am. Well done. Really quickly: love the kickboxing thing (I do it, too), and like you I also have an unnatural addiction to cheese, which I mitigate by running. We’ve probably crossed paths in the park.

Anyway, check out my profile, and if you come away convinced that I’m neither A) a lunatic nor B) a mutant, feel free to drop me a line. Could be fun to talk further. Take it easy.”

I’ve also used similar, shorter variations of this message with non-sarcastic dudes telling them that they seem like-minded and interesting, and always try to keep it brief and lighthearted. As for photos, you guys have seen what’s in my profile – and I added a full-body shot of me crossing a race finish line, per your suggestion.

The funny thing is, with Match at least, you can see who’s viewed your profile and when they did. I can only interpret that to mean that, for the guys that I’ve reached out to who have viewed my page after reading my email but then went radio silent, that they decided they’d rather pass than hit that shit (figuratively.) Ouch.

So, fine. Ew. I didn’t want to date you anyway, Doug in Hells Kitchen. The crosstown commute would’ve sucked. (Just kidding, there’s no Doug in HK. There are, however, a lot of men in Kew Gardens. I don’t even know where the hell that is.)

As for Tinder, I’m just chalking it up to the fact that guys use it as a game, and not a mode of actually meeting women in person in NYC. Like a sexier version of Candy Crush – only with chicks instead of lollipops and gummies. Is it laziness, and they aren’t willing to put forth the effort to set up actual dates? Or do I just need some more duck face bathroom mirror selfies? And yes, if I do the latter, you guys get to choose the color of my thong.

Anyway, I have no means for comparison, so if any of my guy friends on Match or Tinder want to offer their consulting services so I can peruse the female merchandise, now’s your chance. Or maybe it’s just time to join OK Cupid…

Until next time, Wingman faithful, as always I’ll be just winging it.

It’s that time, Wingman faithful. Your chance to turn the tables on me and make the advisor the advisee. See? All those quips about man jewelry and wearing bad shoes are about to come back and bite me in the ass. Somewhere, scorned dudes everywhere are lining up to give their two cents.

So below you’ll find the “About Me” section of my Match.com profile. I found it unexpectedly stressful to sum up who I am for the male online dating population at large. Way more difficult than writing my editorial bio for Miss Wingman…or my grad school thesis, for that matter.

Let me know what you think. Do I sound normal? Overly dude-like? Sarcastic? I consider that last one a compliment, by the way. Also this is my profile photo that appears with the accompanying text.

There’re other photos, too, but they’re all similarly framed – from the waist up. I realize that not having full length shots may make people wonder if I’m a size 2 up top and a 12 on the bottom – or if I have, like, a wooden leg or something – but this chick doesn’t take many head-to-toe pics. Not without other people in them, at least. 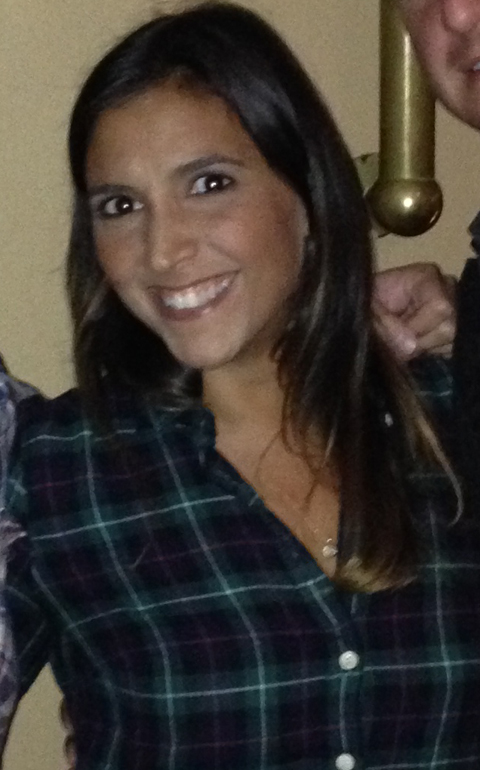 Don’t forget to keep it right here for more of Miss Wingman’s Good Man Experiment, aka “Where Are All The Good Men In NYC?” so that you can play along at home with my version of Choose Your Adventure: Dating edition. Sigh.

Until then, as per usual, I’ll be Just Winging It.

Headline: “Headlines are way too much pressure.”

Nothing I write here could adequately describe who I am (ironic, since I write for a living), but here’s a stab at the Cliffs Notes version of me:

-I fall asleep most nights to SportsCenter.
-I have an unnatural addiction to Fresh and Co salads and guacamole.
-People who eat on the subway repulse me.
-I’ve interviewed most of my musical idols.
-I don’t like anything as much as I love my family.
-My knowledge of pop culture borders on embarrassing.
-I find my zen through a heavy bag or running shoes.
-I wanted to be a Huxtable growing up.
-Getting my Masters in Journalism was the best decision I ever made. Hoya Saxa!
-I live by the mantra, “Don’t listen to anything they say, just pay attention to what they do.”
-Hearing my nephews’ feet bounding down the hall and them exclaiming my name as they run to answer the door is my favorite sound of all time.
-I will probably never give up cheese, carbs or scotch. And I’m OK with that.
-People who make me laugh have a leg up on the rest.