Miss WIngman can do a lot of things to try and help the men of the world, but sometimes – and I hate to say this – you’re on your own. Like when you open your mouths without thinking and accidentally offend the hell out of us. We know deep down it’s unintentional, but that doesn’t change the fact that you’ve just skyrocketed us to a 9.5 on the rage scale. Congratulations, I hope you don’t plan on getting laid ever again.

And by the way, how does that foot taste? 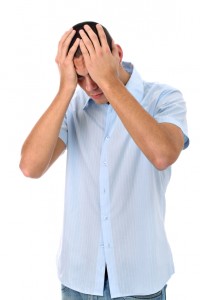 That’s why I’ve compiled a handy dandy guide of verbal no no’s, so that you boys can avoid pushing our buttons (unless that’s what you’re going for). It’s not an exact science, but it should keep you out of the dog house. So here you go, men: The Top 5 Things You Should Never Say To Women.

If you’re smart, you’ll put this on a card, laminate it and keep it in your wallet at all times. If not and you forget to dodge these pitfalls, don’t say I didn’t warn you. Also, may God have mercy on your soul.

5 – “I didn’t think you’d mind.” Um, I think it’s safe to say that, if she’s pissed enough that you’re actually having that conversation, that you were dead wrong. She did mind. And no amount of defending yourself will change that. So what should you say? “I’m sorry, I wasn’t thinking,” is the quickest way out of a tight spot. You may not actually believe that, and you don’t have to employ it, but a well-timed Mea culpa is always a solid life-preserver in a pinch.

4 – “Did you go to the gym today?” Riiiiiiiight. Do you own a helmet? Because you might consider strapping it on immediately after asking that question. Granted, it’s a completely harmless, benign question probably posed out of pure curiosity or small talk. But what we hear? “You need to go to the gym. Because you’re getting fat. And I’m not attracted to you.”

Irrational and insane? ABSOLUTELY. Does that make it any less true from our perspective? Nope, totally not. Leave that question out of rotation altogether, boys. Trust me on this one.

3- That something is “not that bad” or “It’s better than before.” As in clothing malfunction, haircut snafu, or a visible imperfection on our faces or physiques. Why? Because trying to make us feel better by saying something isn’t that bad is like acknowledging that at one point you realize that it was pretty damn bad, or that it’s still heinous but hey – it could be worse. Why is this no bueno? Because you’re supposed to pretend that whatever is upsetting us about our appearance never even occurred to you before we pointed it out. Period, end of story.

2- “You remind me of my_____(fill in the blank female).” Chances are, you’re probably finishing that sentence with “friend,” or “coworker.” But just in case you were planning on saying “mother,” “sister” or “ex,” you’d better be wearing some form of genital protection, or have quick reflexes. We generally don’t like to be compared to any of our fellow females, least of all your blood relatives or women you’ve cast aside for one reason or another. Play it safe and steer clear of this phrase, if you know what’s good for you.

And finally, occupying the #1 most we’re-going-to-hate-you-for-a-while-if-you-say-this spot is, drum roll please…

1- “Relax.” Single most annoying thing to can say to anyone, whether they’re actually worked up or not. Strike that, especially if they’re not worked up, because it implies that you think we are visibly agitated. On behalf of women everywhere, I simply say “F**k you.”

Basically that’s it. In a nutshell, minus a few incident-specific examples. Like I said, we may realize that we’re overreacting or that you didn’t necessarily mean to upset us, but that won’t get the look of frozen horror off our faces any quicker.

Play it safe. Or if you’re a gambling man, don’t…just don’t be surprised if you suddenly find yourself a party of one. May your wit always be quick, boys, your tone always be kind, and may you keep the number of the nearest florist on speed dial.